This weekend sees the annual Taste of Buffalo food festival, which takes place downtown. We go every year, and I've blogged about it before, but here are thoughts from this year's edition! (If you don't care, I'll put it below the fold and you can ignore it. Unless you read me on Google Reader, in which case, well, you're screwed.)

First of all, the weather on the day was absolutely, gob-smackingly, you-wanna-make-sweet-sweet-love-to-it, perfect. Sunny, only an occasional cloud, a nice breeze the entire time, just one degree less than when you start sweating, and a sky so blue that, as Mr. Kinsella wrote, "it hurts your eyes just to look at it." 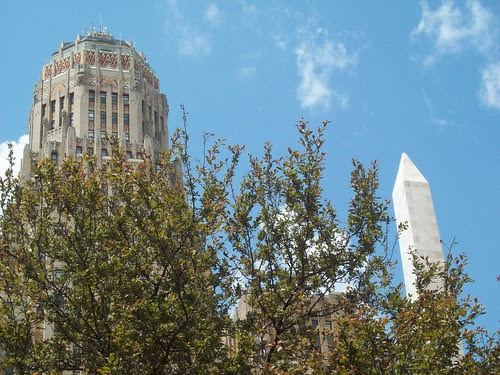 But before I get too excited here, let me get my usual gripes about people-behavior at The Taste out of the way right here. 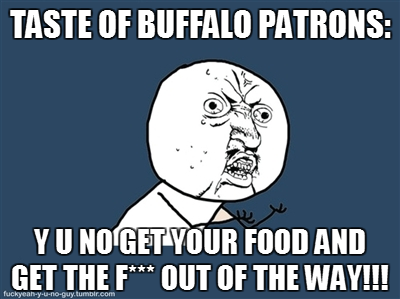 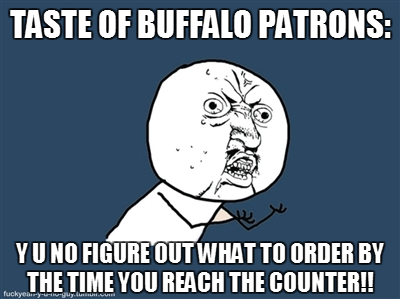 Seriously, those are the two things people do at The Taste that drive me crazy. As I always point out: there is plenty of room to get the hell out of the way and eat once your food is in your hand. Standing in the middle of the street, or worse, at the counter, is as good a way to announce your douchery to the world as holding up a giant sign reading "Hey world! I'm a douche!"

OK. That's out of the way. What did we eat? Here's a rundown, with thoughts on each dish, roughly in the order that we ate them. (If I remember rightly, that is.)

Just Pizza: two slices here. The Kid had a cheese-and-pepperoni slice all to herself; The Wife and I split a steak-and-sweet peppers slice. We eat here every year. We've always been big fans of Just Pizza; we just don't go there often because there are about a dozen pizza places that we also like that are a lot closer to Casa Jaquandor. (And no, I'm not exaggerating with the "about a dozen" thing.)

58 Main Street Barbecue. Pulled pork nachos. This was junk-food goodness. It was really basic, and not any kind of gourmet item at all -- standard nacho chips with nacho cheese sauce, but with barbecue pulled pork added to the mix. This shouldn't win any "foodie" awards, but it hit a comfort-food sweet spot!

Alex's Place. Here we had fried calamari. I'm a big fan of fried calamari, but a lot of times, the calamari is overdone so that with the fried breading, you might as well be eating an onion ring. Their calamari was still tender and tasted distinctly (although not strongly) of calamari. They also served it with banana peppers, which always makes me happy -- I'm a banana pepper freak.

The daughter even reluctantly tried one, even though she was a tad skeptical. Her verdict? Well, we ended up going back for a second helping later on so she could have more. Awesome!

Danny's. Chicken wing soup. Because it's Danny's Chicken Wing Soup. We eat at Danny's all the time, and I make my own reasonably kick-ass chicken wing soup, but still -- we got some soup at The Taste anyway. Wish they had croutons for it, though.

Saigon Cafe. Summer roll. This thing -- a kind of cold spring roll -- was wonderful. I really loved this dish, with its bright, clean, and cold flavor. It was served with two dipping sauces, a hoisin-style sauce (not unlike what you put on the pancakes in mu-shu pork) and a chili sauce that packed quite a punch. Here's a photo. 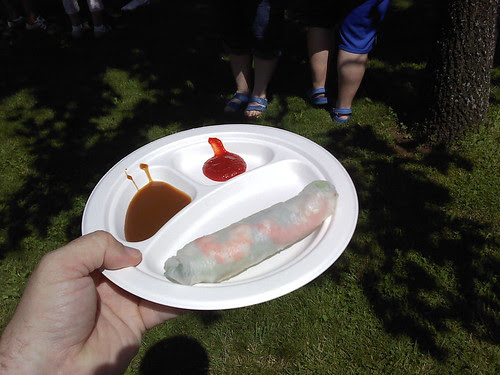 Seriously, I could have a meal of four or five of these.

Dinosaur Barbecue. Pulled pork sliders. We're big fans of pulled pork, so this was typically good. I didn't realize until afterwards that they had a table set up with additional sauce for you to doctor it, though. Oh well.

Carribean Experience. We've had their Jerk Chicken every single year we've gone to The Taste, even back when it was held on Main St. We still love it.

Prima Pizza. Because The Daughter can't have pizza from just one place, we always stop here, too. She had her cheese-and-pepperoni slice, and The Wife and I split half a sausage calzone. It was served with marinara sauce in a dipping cup, but it wasn't fresh-made sauce -- it had a paper lid you had to peel off, like the syrup that McDonald's serves with pancakes. This sauce was very sweet. I enjoy a sweet marinara or pizza sauce now and then, but The Wife wasn't thrilled. The calzone was OK. Not great, but not awful, either.

Nick Charlap's. By this point we were getting a bit warm, so it was time for Ice Cream stop number one. Small cones of soft-serve for all -- choc-and-vanilla for The Kid and I, and a raspberry-something else twist for The Wife.

Here we took a break to go into the New Era hat store for the first time. I was hoping for a water fountain where I could refill our water bottles, but no dice. I suppose it's necessary, but I was amused by the intimidating-looking security guards all over, keeping careful watch on...a store full of hats.

Interestingly, I saw a number of folks in Pittsburgh Pirates hats. Fair weather fans, now that the team is actually playing well for the first time since 1992? Or long-time, in-the-closet fans? Hmmmmm!

Fat Bob's. Macaroni and cheese. I would have gone for serving number three of pulled pork, but by this point, The Wife wasn't wanting any more pulled pork, so we got a dish of their signature mac-and-cheese. Here it is: 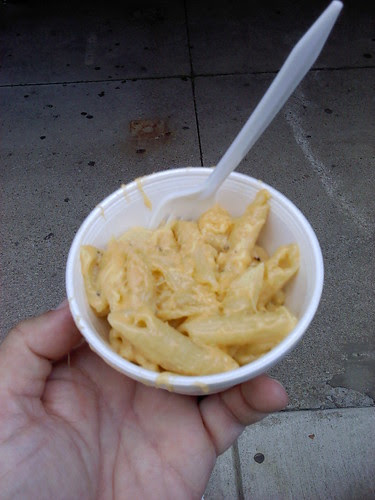 It's perfectly good macaroni and cheese, it really is. I don't think it's spectacular in any way, though. I've heard a lot about it, and I'd order it if I ate at Fat Bob's, but I wouldn't go out of my way on the basis of this mac-and-cheese. Not when I can make my own.

Chester's Cajun Grill. Blackened shrimp over cajun rice. This was a huge disappointment, the only one on the day. We'd never had this before, so it really sounded good -- we love shrimp -- but it did not end well. I'm no expert, and I certainly don't have the most refined palate in the world, but surely Cajun cooking should not leave an overwhelming sense of being comprised of nothing more than salt and heat. This dish was extremely salty, and the spiciness was that disappointing, flavorless spiciness where the heat doesn't taste like anything. There was no flavor of shrimp, no flavor of whatever peppers provided the heat -- just salt and heat.

Anderson's Custard. We wrapped up with ice cream cones -- mint chocolate chip for me, cotton candy for The Kid, and something with oreos for The Wife. After this, we bid farewell to Taste of Buffalo 2011. Three hours of walking, $55 in tickets, three water bottles and three cans of Squirt later. Can't wait 'til next year!

And if I might editorialize about downtown Buffalo a bit here...I've always generally been a fan of Buffalo's older architecture, but over the last five or six years I've grown increasingly frustrated with the fact that the glut of old buildings around here, combined with folks who really love them some old-ass buildings, and a political culture that makes getting a single building erected more difficult than, say, mounting a major invasion by sea of Normandy, France, means that downtown Buffalo is now...well, there's no other way to say it. I think it's starting to look a bit ugly down there. Not old. Not run-down but with pockets-of-progress. Just plain ugly.

Looking around at the buildings of downtown, one word kept popping into my head over and over and over again: crumbling. So much of downtown Buffalo is doing just that: falling apart. Witness what has befallen the old Hotel Statler, which sits a literal stone's-throw from City Hall: 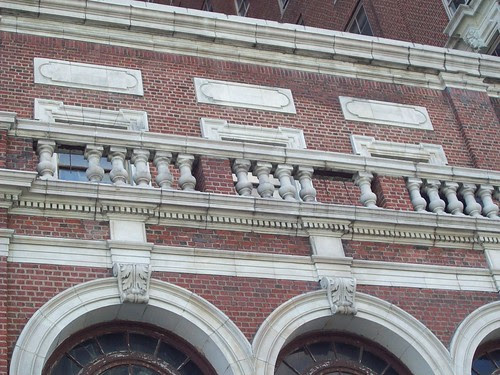 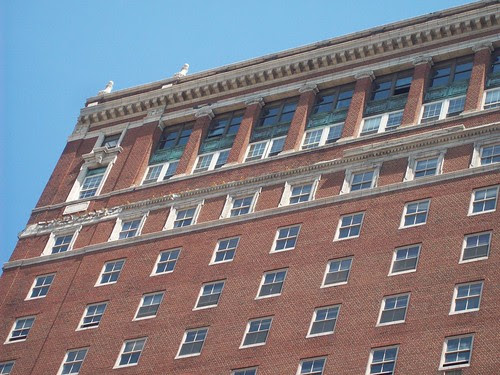 You may have to embiggen that last one to really see it, but entire sections of terra cotta bordering have tumbled off that building. Now, the Statler is a special case: it has gone through prospective changes in ownership a number of times over the last decade, and only in the last year has it finally been taken over by someone with money, so repair work is beginning. This is a genuinely saveable building. But all over downtown are very old brick monstrosities that are crumbling, whose majorities of windows are shattered, and whose sides still sport large painted advertisements for products or businesses that haven't existed since before the giant majority of people even living in the city were born. Sometimes these buildings are right across the street from the new buildings that have gone up in the last ten years or so.

I'm not sure what to make of this, but downtown Buffalo seemed to me today to be a modern urban Acropolis, and I don't mean that in the "site of enormous importance to the human heritage" sense but in the "decaying ruin of a civilization long-since gone" sense. Everywhere I looked was a building that made me think, "Ye Gods, why doesn't someone just tear that damned thing down." And the answer will almost always be, "Because no one wants to build anything here, and even if they did, someone will claim that that horrible decaying brickpile is historical and needs to be preserved."

Wrecking balls. And lots of 'em.
scrawled here by Kelly Sedinger at 8:24 PM

This is the first time I wished blogs were equipt with smellovision and tastovision.