Well, I have no idea what the hell to blog about right now. I could babble about football a bit, but the Bills' season is done and there's only so much gabbing I can do about the NFL Draft that's not for four months anyway and I don't really care about any of the college bowl games, so football's out. And I said all I had to say felt I should say about the shootings in Arizona the other day, so forget about that, too. I've got some books I could blog about, but I still need to write the posts. I keep meaning to start my Fixing the Prequels series on Revenge of the Sith, but that's not ready to go yet. Teevee shows have mostly been in reruns, and I haven't seen too many movies lately. So what else is there? 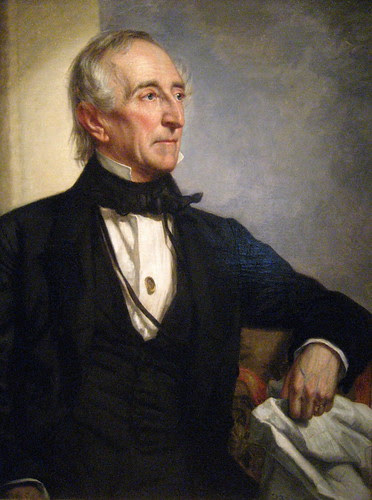 That's John Tyler, the tenth President of the United States. Tyler ascended to the Presidency because he was the Vice President when the ninth President, William Henry Harrison, died one month into his term of office. There was actually quite a lot of confusion over this, as the Constitution wasn't actually clear about what happened upon the death of a President. The problem was one of wording. What the Constitution actually says, in Article II Section 1, is this:

Basically, no one was sure if Harrison's death meant that Tyler actually assumed the Presidency, or if he just stayed Vice President but with the powers and duties of an actual President. Even though the Congress eventually passed resolutions declaring that Tyler was, in fact, the President in fact as well as in duty, this was a point of contention for his opponents, who would refer to him as "Acting President" or "His Ascendency".

Tyler's biggest accomplishment was the annexation of the former Republic of Texas. I think that's a good thing, even though I tend to not be enamored of all things Texan these days. I suppose we ultimately have Tyler to blame for the Dallas Cowboys, for one thing.

Tyler left office in 1845 but lived another seventeen years. As the nation moved inexorably toward the Civil War, Tyler stood up to be counted...on the Confederate side. In fact, he stood up on the Confederate side to such a degree that he was actually elected to the House of Representatives of the Confederate States of America. He died in 1862 before assuming that office, but it seems to me that John Tyler may well have been the only President who went on to commit an act of treason against the United States. I've often wondered what would have become of him had he lived beyond the end of the Civil War.

Why do I have John Tyler on the brain today, though? Because of something I read on Twitter this morning. I couldn't believe it and had to look it up, but I'm damned if it wasn't true. Follow along with me here: John Tyler was born in 1790 and died in 1862. He was married twice, and with those two wives, Tyler had 15 children. The last of his children was born in 1860, when Tyler was either 69 or 70 years old. But what gets really interesting is his fifth son with his second wife. That would be Lyon Gardiner Tyler.

Lyon Tyler was born in 1853 and died in 1935, at the age of 82. He had something in common with his Presidential father: he was fathering children at a ripe old age himself. He had a son born in 1924 (when he was 71, and when President Tyler had been dead for 62 years), and another in 1928 (when he was 75). Both of these sons are still living today, which means that our tenth President, who was born during the first term of our first President, has two grandchildren who are still with us during the first term of our forty-forth.

Who says that history can't be a bit mindblowing sometimes?
scrawled here by Kelly Sedinger at 9:38 PM