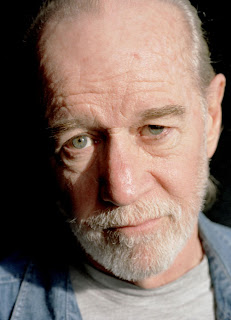 I'm going to forgo Sentential Links this week, in favor of a brief celebration of George Carlin. I loved his comedy dearly, even when it partially offended me, and even then, my offense was pretty mild anyway. Carlin was all about the language, and I loved him for that. So, here are some fine instances of Carlinia, taken from his book Napalm and Silly Putty. (I can't find my copy of Brian Droppings at the moment. It was just here a minute ago....)

(UPDATE: It just occurred to me that I now live in a world that has two George Bushes and zero George Carlins. As a state of affairs, I find this deeply disappointing.)

On the human colonization of space: Can't you just sense how eager the rest of the Universe is for us to show up?

So far, this is the oldest I've been.

I think someone could make a lot of money if they set up a little stand at the Grand Canyon and sold Yo-Yos with 500-foot strings.

Road rage, air rage. Why should I be forced to divide my rage into separate categories? To me, it's just one big, all-around, everyday rage. I don't have time for fine distinctions. I'm busy screaming at people.

Sometimes they say the winds are calm. Well if they're calm, they're not really winds, are they?

I think a good title for a travel book would be Doorway to Norway.

When Britain returned Hong Kong to China there was a long, formal ceremony. The whole thing looked well-rehearsed, and I wondered how everyone knew exactly where to stand and what to do. After all, the event had never taken place before; how could there be a set of procedures? Do the British have a manual on returning colonies? If so, they won't be needing it much longer.

Sometimes people say, "Do you have the time?" And I say, "No, I don't believe I do. I certainly didn't have it this morning when I left the house. Could you possibly have left it somewhere? You know, now that you mention it, I believe the Navy has the time. In Washington. They keep it in an observatory or something, and they let a little of it out each day. Not too much, of course. Just enough. They wouldn't want to give us too much time; we might not use it wisely." Sometimes, in a playful mood, when asked if I have the time, I'll say, "Yes," and simply walk away.

On expressions he didn't like: "Fine and Dandy". That's an old-fashioned one, isn't it? You say to a guy, "How are ya?" He says, "Fine and dandy." Not me. I never say that. You know why? Because I'm never both of those things at the same time. Sometimes I'm fine, but I'm not dandy. I might be close to dandy. I might be approaching dandy. I might even be in the general vicinity of dandyhood. But not quite fully dandy. Other times, though, I might indeed be highly dandy – but not fine. One time, 1978, August. For about an hour, I was both fine and dandy at the same time. But nobody asked me how I was!

By the way, next time you shop at a supermarket in a neighborhood that has a higher than average marijuana use, take a look at the cookie section. Combat zone. Half the packages have been opened, and all the really good cookies are gone.

"Where the hell are the Mallomars?"

"Oh, we can't get Mallomars into the store. Folks line up at the back dock for Mallomars."

Who decides when the applause should die down? It seems like it's a group decision; everyone begins to say to themselves at the same time, "Well, okay, that's enough of that."

Geologists claim that although the world is running out of oil, there is still a two-hundred year supply of brake fluid.

The Nobel Prize in mathematics was awarded yesterday to a California professor who has discovered a new number. The number is "bleen", which he says belongs between six and seven.

According to astronomers, next week Wednesday will occur twice. They say such a thing happens only once every 60,000 years and although they don't know why it occurs, they're glad they have an extra day to figure it out.

I never take any personal precautions against germs. I don't shy away from people who sneeze and cough, I don't wipe off the telephone, I don't cover the toilet seat, and if I drop food on the floor, I pick it up and eat it.

Even if I'm at a sidewalk cafe.

On New Year's Eve during a soccer riot.

If a centipede wants to kick another centipede in the shins, does he do it one leg at a time? Or does he stand on fifty of his legs and kick with the other fifty?

Just for fun: call one of those How Am I Driving 800 numbers and complain about a particular driver. Tell them he was driving on the sidewalk, vomiting, giving the finger to old women, and dangling a baby out the window.

In restaurants where they serve frog's legs, what do they do with the rest of the frog? Do they just throw it away? You never see "frog torsos" on the menu. Is there actually a garbage can full of frog bodies in the alley? I wouldn't want to be the homeless guy looking for an unfinished cheeseburger and open the lid on that.

Cats are very tactile; they love to rub against your leg. If you own a cat, and you have a leg, you've got a happy cat.

"Oh boy oh boy! I'm rubbing against his leg! How I love his leg!"

If you have two legs, you've got yourself a party.

"Oh boy oh boy, two legs! Now I can do the figure eight."

They love to do the figure eight: around one leg, in between, and then around the other.

He'll rub against your legs even if you're not there yet. You might be twenty feet down the hall. As soon as he sees you coming he starts walking sideways. He doesn't want to miss a shot at your legs.

Why is it that when the two main characters in an action movie have their big climactic fight it always turns out that both of them are really good fighters? Just once, wouldn't you like to see a fight between two leading male characters where one of them gets the shit completely beat out of him in about eight seconds? Especially the hero.

All music is the blues. All of it.

Do you realize that somewhere in the world there exists a person who qualifies as the worst doctor? If you took the time, by process of elimination you could actually determine the worst doctor in the world. And the funny part is knowing that someone has an appointment to see him tomorrow.

It doesn't punish, it doesn't reward, and it doesn't judge. It just is. And so are we, for a little while.

Thanks for the memories, George.

Thanks for that. I loved George. I happened upon your blog by doing an AOL search for "George Carlin on voting" and it took me to an older blog of your's. You write well so I started perusing. This was a nice little Ode to George. Thanks again.

You are great anthologist. Supper compilation about George Carlin Quotes. I have compiled many quotes from you.