Star Wars has generated a lot of ancillary creative efforts beyond the films; starting in 1991 with Timothy Zahn's novel Heir to the Empire the saga has been explored at length in full-length books and also in comics, telling stories not only of the adventures of Luke, Han, Leia et al after Return of the Jedi but also delving into the deep past to tell stories of the Sith and the Jedi. Some of this stuff is quite good. Zahn's novels are a high point, even functioning as well-written space operas in their own right as well as serving as Star Wars stories, and I've heard some good things about Ann Crispin's and Michael Stackpole's works. Some of it, though, is downright bad: Kevin J. Anderson's Jedi Academy trilogy starts out promising but fizzles out, and those who found the love story in Attack of the Clones disappointing would do well to have a look at Dave Wolverton's The Courtship of Princess Leia, which is an utter disaster. (Not only does that novel reduce everybody's favorite brash space pirate, Han Solo, to a lovesick stalker and kidnapper, but it also gives us such amazing things as....wait for it....C-3PO singing.)

It did not all start in 1991 with Zahn's first book, however. There were other attempts at "Expanded Universe" books during the original trilogy. Brian Daley wrote a trilogy of novels about Han Solo's adventures prior to his meeting Luke and Ben in A New Hope; Alan Dean Foster wrote a book called Splinter of the Mind's Eye which takes place after ANH but before The Empire Strikes Back; and I seem to recall a couple of books about Lando Calrissian. Most notable, though, was the comic book series published by Marvel Comics between 1977 and 1987. This series began with a six-issue adaption of A New Hope, and then proceeded to run for 101 more issues after that. (The adaptation of The Empire Strikes Back came in issues 39-44, and the adaptation of Return of the Jedi actually did not appear in the series itself but was a separate, limited series of four issues.) Starting with Issue #7, the Marvel series struck out on its own, telling stories that were "Beyond the Movie! Beyond the Galaxy!". The first story told after the ANH adaptation centered on Han Solo and Chewbacca, who took off from Yavin to go pay off Jabba the Hutt. They are almost immediately waylaid by space pirates, who steal all of their money -- leaving Han with nothing to pay Jabba. So, he and Chewie go to some planet whose name I don't recall and end up getting recruited by some locals to fight off the local bad guy (whose impressive name is "Serji-X Arrogantus"). Han and Chewie in turn recruit a rag-tag bunch of people to fight Arrogantus in Magnificent Seven style. Among others, there are a crazy old Jedi named "Don Wan Kihotay" and a six-foot-tall rabbit named Jaxxon. (I swear I am not making this up.)

As goofy as that story sounds -- and it really is as goofy as it sounds -- the Marvel Star Wars series was actually not that bad. Occasionally it was lousy, but some interesting stories were told and it's fun to realize that these tales were spun at a time when all the particulars of the Star Wars universe were still unknown. This got the series's writers into occasional trouble: Jabba figures in the comic from the second issue, but of course Jabba's looks weren't settled by George Lucas until ROTJ, so the Marvel Jabba is completely wrong; worse than that, at one point the Marvel series actually had Han Solo pay off Jabba, which they then had to hastilly backtrack when they learned that in TESB the price is still very much on Han's head. One of the special "Annual" issues (do comics still do the "Annuals"?) was a flashback story told by a guy who once helped Obi Wan and "Luke's father" escape Darth Vader. And so on. Lucasfilm pretty much ignored the Marvel series, which made for some bizarre twists and turns as the comic's writers tried to accomodate the details in the movies; and after ROTJ, the writers were pretty much told that they couldn't really do anything at all -- at that point, Star Wars was totally on the back burner and the Powers-That-Be didn't want anything to mess it up, so the comic kicked off an "alien invasion" plotline that actually started fairly well but was resolved in hackneyed fashion when the book was abruptly axed as of issue #107. (And now I see that the "Expanded Universe" novels are in the midst of, well, an "alien invasion" plotline.)

The Marvel Star Wars comics offer an intriguing "alternate universe" take on the whole thing which is almost always interesting and quite often highly entertaining (six-foot rabbits more than two decades prior to Jar Jar Binks aside). What's more, the series is now being issued as a series of trade-paperbacks by Dark Horse Comics. The image below is the cover to the first book (which is also the cover to Marvel's Star Wars #1), and links to the Amazon info. 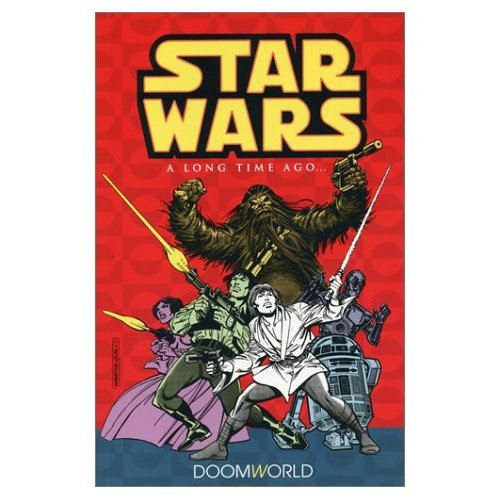 scrawled here by Kelly Sedinger at 10:58 AM