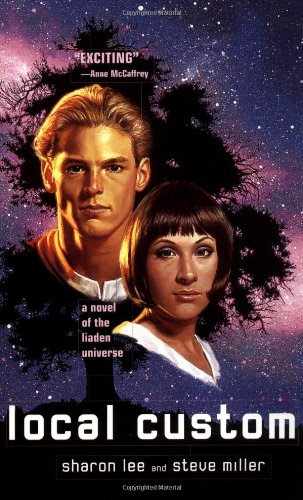 Prequels present a number of unique problems in terms of storytelling. To the extent that the events in the original work are dependent on those events to be depicted in the new work, a sense of inevitability can develop as the storyteller works within the constraints of the events that are already known to happen and still tell a story that is somehow fresh and satisfying on its own. This problem is faced most famously by George Lucas as he fills in the blanks behind the original Star Wars trilogy with the new prequel trilogy, but the problems of prequels arise in other places -- one such place being the novel I have just finished reading, Local Custom by Sharon Lee and Steve Miller. The specific problem herein doesn't lie so much in whether the story is exciting or involving given that which comes later; what is at issue here is if one should begin the series with the prequels, given that they were not created in that order.

This book is one of two prequels to a series of space opera novels called "The Liaden Universe" (so named because the central planet is a world called Liad). I have found some very positive reviews of these novels -- here and here, for example -- that make them sound irresistable: a blend of space opera and romance, with wonderful characterizations and exciting action, et cetera. These books have a lengthy publishing history: the original novels were out of print for years, and then they were reissued in trade-paperback format (but apparently those, too, are now out of print). Lee and Miller have now written two prequel novels (of which Local Custom is the first and Scout's Progress is the second), which were also initially published as a trade-paperback omnibus but are now being issued as separate novels. Then, all of the remaining books in the series (I believe there are seven altogether) will be reissued as well. This reissuing order -- in the story's chronological order, as opposed to the order in which the novels were originally written -- presented me with some key problems. It's not unlike the difficulty faced by someone who has never seen a Star Wars film before: despite the fact that the events of The Phantom Menace happen first, the story really should be entered with A New Hope. The same applies here. I probably should have waited for Conflict of Honors to be issued (it's due next month). I suspect that I would have found the action of Local Custom more involving had I known the story to which it is leading.

That's not to say that it is a bad book, because it is not. It is, in fact, quite good -- mainly from a standpoint of characterization. The story involves a young scion of an important clan on the planet Liad, Er Thom yos'Galan (the names in this book are a bit of a stumbling point), who is being forced to marry so he can produce the heir which is required by the laws of the clans. The problem is that Er Thom is still in love with an Earth woman with whom he had an affair some years before, Anne Davis. He decides that before he marries, he must see Anne one more time, and so he goes to Earth to do just that -- and so discovers that he fathered Anne's child, Shan.

This is the setup for a "culture clash" story. Er Thom wants Shan to be his heir -- in fact, he believes that it is required. Anne only wants to raise her son herself, and not have him stolen by the Liadens. There are intrigues that involve the Liaden concept of honor (called "melant'i" in the novel), and the lengths to which aristocracy must go to save face. Local Custom, then, is basically a romance; those who come to space opera expecting lots of space ships and action will be disappointed. The book's only action, per se, comes in the last hundred pages. This is not to say that the book is boring, but it did have me wondering for a long time -- well over half the book -- when the preliminaries would end and when the real story would begin. Additionally, a subplot involving Anne Davis's status as a scholar of linguistics is only handled in perfunctory fashion, and not really involving. Again, I wonder if this would not have been the case had I read the original series, which apparently deals with Shan's adventures as an adult, first; the "linguistics" subplot doesn't seem that important given the relatively few pages devoted to it here, but it seems more important as a seed for future action. I may be wrong here (if you've read the original series, don't tell me so because I want to learn for myself!!) but the effect of this subplot was to feel a bit like the Death Star diagrams in Attack of the Clones. Was that an Easter egg for fans, or a precursor of some major action down the road retrofitted for the prequels? All through the book I had the feeling that I would be better served setting these two prequels aside until after I complete the originals. For this reason above all I am going to wait to read Scout's Progress until after the rest of the series is out.

The book's strengths are definitely its characters and their interactions. Lee and Miller (a husband-and-wife writing team) do an excellent job of creating a society in the Liadens that seem like ours on some points but differ wildly on others, particularly with regard to class structure. Most amazingly, they do this without much by way of "infodump" at all; anyone needing a primer on the oft-quoted rule of storytelling, "Show! Don't tell!", could do far worse than study what these two have done here. The Liaden concepts of honor, balance and necessity are all fascinating, and I look forward to exploring them more as the other books come out. My only complaint, and it is minor, is in the Liaden words that pepper the story. I've never much liked books that have me referring to a glossary on a fairly regular basis. Luckily, Lee and Miller are sufficient to the task of making me overlook that particular problem.