Of Arm Jabs and Soup Memories 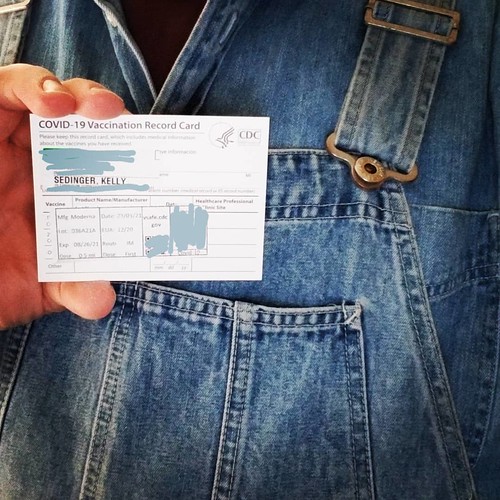 Yesterday I got my second injection of the Moderna COVID-19 vaccine, which means that in about two weeks, when my immune system has had time to do all the processing work it has to do, I'll be fully vaccinated against this fecking pathogen. Get your vaccinations, folks. The sooner we all get it done, the sooner this thing can be pushed to the area of "annoying problem" and not "all-consuming threat".

My experience was pretty mild, compared to most. The first shot left me with a sore shoulder, and it wasn't even sore all the time, just when I moved it in certain ways or exerted it. It felt roughly like the soreness that follows a tetanus shot (my memory of which was pretty fresh, having received that particular booster back in January). I had heard that the second shot tended to provoke stronger reactions in people, ranging from more persistent shoulder soreness to the body enduring what is essentially a simulated bout of influenza for a day or two.

Well, my shoulder did get more sore than last time. Last night, I could lift my left arm (where I got both shots) about this far before I got a nice stiff bolt of pain that made me wince: 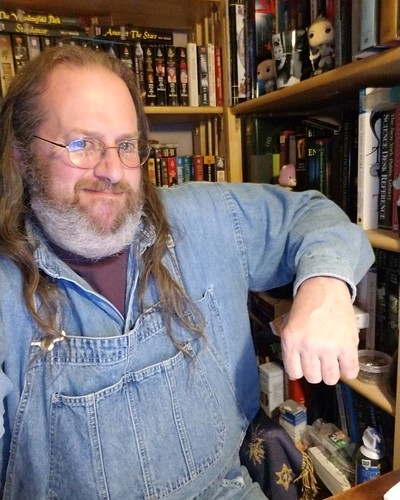 I took today off from work (at work's strong encouragement to do just that) just in case I had it rough. Luckily, I did not have it rough. The shoulder is still sore, though that is slowly fading, and as I write this I can lift my left arm without wincing, though not without a bit of pain. I didn't suffer much by way of accompanying aches or pains, nor did I have any nausea or fever or other flu symptoms. What I did have can be described as a persistent fatigue that left me with not a great deal of enthusiasm for daily tasks. It was comparable to two feelings: one is the fatigue I feel two days later after a really bad night's sleep. When I sleep really badly--say, only getting three hours of sleep in total--it doesn't usually affect me much the next day, but the day after that is usually grim. If my sleep Sunday night into Monday is godawful, then I'll get through Monday just fine, but Tuesday will be a brain-fog of a day, no matter how well I sleep Monday night into that Tuesday. That's how it kind of feels today.

The other thing I'd compare this feeling to? A light hangover. Not a rip-snortin' hangover where I want to wear sunglasses and massage my own temples all day someplace in the silence of a Buddhist monastery, but just that general sense, again, of brain-fog and lack of enthusiasm, focus, motivation, or anything like that.

As I write this, it's mid-afternoon and that feeling is mostly gone, too. Yay!

Did I prepare for this whole ordeal at all? Well, a little. I made sure to sleep really well each day the last several nights, and yesterday I drank three cups of green tea and doubled up my daily doses of Vitamins C and D. I also doubled up my daily low-dose aspirin, but I did not take any ibuprofen or acetaminophen prior to the fact. I try to avoid those until I'm really hurting. Oh, and I drank more water than usual yesterday, and I generally am very good about staying hydrated.

I have no idea if those things helped, in all honesty, but here I am, coming out of the fog.

The feeling of a light hangover, though, had another effect: it hit my appetite in a big way. I expected this, too, so the other day I stocked up on my favorite salty soup of choice for such moments: Ramen noodles! 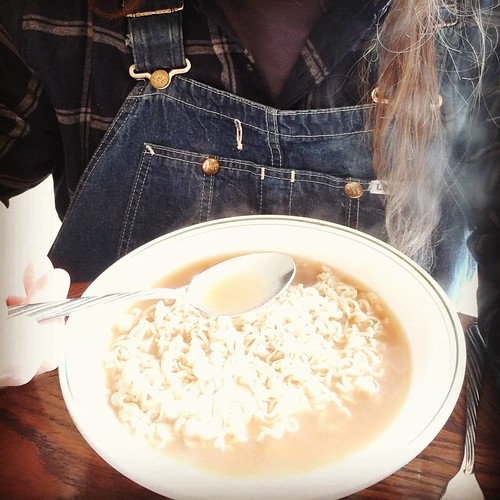 It's funny how some people get through their Ramen-fed college years never wanting to touch Ramen again, while some, like me, never lose their taste for the stuff. I indulge my Ramen fondness relatively rarely (look at the sodium content on the label and you'll see why), generally only having Ramen maybe three or four times in a year. But there's just something about a really salty and hot soup that always helps me recover from the low-grade arse-kicking of a mild hangover.

And that brings me (in very long-winded fashion, I admit) to the "Soup Memories" part of the title of this post. The beef flavored Ramen was great! I've loved Ramen since I was very young, when my parents would serve it up with buttered rye crisp on the side. (And it had to be the rye crisp that came in big circles with a hole in the middle, from which you would break an uneven piece. The nice square stuff of today, in neat rectangular packages? I'm sorry, but it's fine and it's very not right.) And sometimes I'll make chicken-flavored Ramen and add a fried egg to it. I was skeptical of that at first but then I tried it one day, and when you break the yolk into the soup, you get this wonderful creaminess that's pretty great.

Yes, Ramen is good for the light hangover. But sadly, the greatest light hangover treatment in soup form is no longer available, because in 2010 the folks at Campbell's discontinued it.

I'm talking about this:

Ahhh, this stuff. Another flavor of my youth that's likely gone forever, at least as I remember it. I should make my own sometime--recipes abound, you know!--and obviously, homemade will be better than some condensed canned soup. But, well...as Jeff Smith (I know, I know) told us many times, food and memory are inextricably bound together. I remember many a time, as a kid and later in college and beyond, opening the can and dumping the congealed contents into the sauce pan, adding the can of water, stirring the thing as it heated and the congealed contents...um...uncongealed.

Pepper Pot soup is a regional thing, in the Campbell's incarnation based on a soup that was popular for many years in Philadelphia. As one of its main ingredients is beef tripe, I assume that it was basically a stew or soup that originally rose as a peasant dish whose main grace was using up bits of the cow that were generally last to be consumed. The local Philly lore has Pepper Pot soup having been a significant part of the diet that got General Washington's soldiers through that winter at Valley Forge. Other food historians I've perused believe that Pepper Pot was the inevitable result of the mixing of cultures--including the slave cultures--in the original colonies. Note the branding in this old advertisement, with the tricorn-wearing men (I'm assuming women found Pepper Pot equally nourishing, but we couldn't really advertise that back when, could we?): 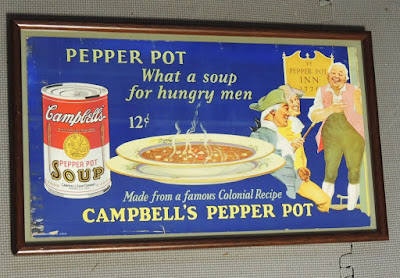 What does it taste like? In the Campbell's version, it was basically a beefy broth with some vegetables, little bits of tripe (usually cut very small, I didn't even know what they were until many years into my regular eating of the stuff), a pleasing dose of salt, and a very pleasing--and warming--dose of pepper. It's one of those soups that intensely satisfies, not just when you're having soup because soup sounds good or because it's one of the courses, but when you're in that kind of place when your body is saying Give me SOUP.

By the late twentieth and early twenty-first centuries, Philadelphia pepper pot fell out of favor, although it continued to be made by home cooks. Many institutions that had served it as a staple dish, such as the Four Seasons Hotel and the Union League of Philadelphia, removed it from their menus.  Campbell’s and Old Original Bookbinder’s, a food division created by a restaurant of the same name in Philadelphia to sell packaged versions of their soups, condiments, and sauces, also stopped selling canned pepper pot by 2018.

This seems to me a pity. Food is memory, remember...and I'm going to have to figure out how to make it on my own, because I'm wanting to taste it again, and now it's because I miss the flavor, and not because I'm getting hung over on any kind of regular basis!

I checked with Amazon, which said that Cambell's Pepper Pot Soup was made in Canada. Unfortunately, it's out of stock and they don't know when it'll be available again. https://www.amazon.com/Campbells-Pepper-Soup-10-5-Ounce-Cans/dp/B000H1730M/