The anniversary is something of a misnomer. 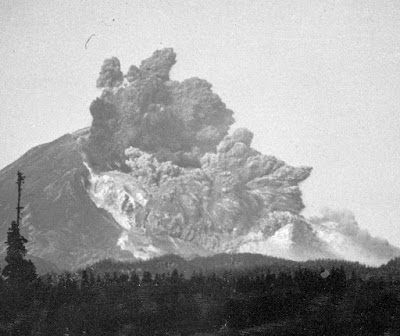 Mt. St. Helens, a mountain in the volcanic Cascade Range in southwestern Washington State, was always thought to be on the verge of significant volcanic activity, and one day when I was in school in March, 1980, my fourth-grade teacher wheeled a teevee cart into the classroom. She plugged it in and started tuning to one of the local stations, which was carrying the event live. An earthquake had jolted Mt. St. Helens, and the mountain was now venting steam from its summit.

If it seems odd that this was on local news, at the time my family and I were living in Hillsboro, OR. We were about sixty miles away from Mt. St. Helens. We had day-tripped there a few times. I don't remember much of those day trips, but I remember the mountain being a lot less of a jagged peak than Mt. Hood, which so famously looms over the Portland skyline. Mt. St. Helens was more graceful, a rounded cone.

Although from where we were, we couldn't see the mountain itself. Just this gigantic tower of ash rising into the sky.

Mt. St. Helens continues to be somewhat active to this day, though nothing like what happened in 1980 has happened since.

I remember reading, years later, that as enormous as the devastation was--entire forests leveled, lakes literally sterilized, thousands upon thousands of animals dead--the region came back to life far faster than anyone ever expected. There are fish in Spirit Lake again, and forests are slowly coming back. The evidence of the eruptions still exists, though; Mt. St. Helens will never again be that graceful rounded cone, but a marred shell of a crater, and to this day the waters of Spirit Lake are partially covered by a solid carpet of destroyed trees, blasted from their roots. 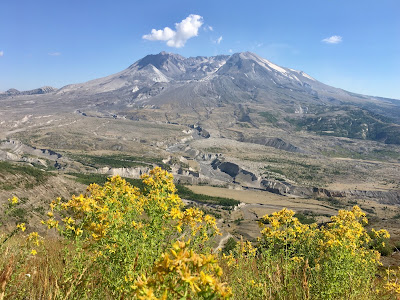 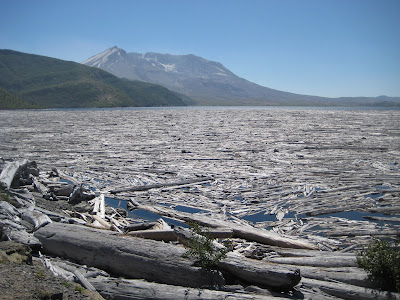 Mt. St. Helens and its eruption rank among the most amazing things I've ever lived through (weird phrase, that, since it implies that it was somehow an ordeal in which I took part), and it is thus far the largest natural event I've ever witnessed. It was, quite simply, stunning. I'm glad I got to see it...from a distance. And upwind.

(Images from Wikipedia: here, here, and here. The title of this post quotes the radio transmission sent by geologist David A. Johnston, to his USGS colleagues. Johnston was encamped six miles away from Mt. St. Helens on May 18, and in this transmission he became the first person to report that the eruption was happening. Johnston was swept away and killed by a lateral blast seconds later, and his remains have never been found.)
scrawled here by Kelly Sedinger at 8:09 PM

Email ThisBlogThis!Share to TwitterShare to FacebookShare to Pinterest
Labels: Events of the Day, Nature