NOW where the hell have I been???

Yup, that was another unplanned hiatus, folks. This time it was technological in nature: my computer failed spectacularly eight days ago, to the tune of doing a factory reset on the machine (basically, returning it to "Just out of the box" status), after a diagnostic tool told me that my hard drive was failing. This was irritating news after owning this machine for just nine months, so after I got it up and running again with the factory reset, I took it to the Geek Squad for examination and consultation before I risked putting all my stuff back on it and moving on. Luckily, as I am exceedingly religious about backing up my stuff, the only annoying data loss I experienced was a few downloaded teevee shows I was still waiting to watch; these I can grab again or even stream if I need to.

I did learn something, though: apparently Dropbox, which I use as my secondary cloud-based backup, is a massive hog of hard drive resources! And my practice up to now has been to have it running in the background at all times, which means that I'm basically maxing out my poor hard drive each time I use my computer. Ouch. I'm still using Dropbox, but now I'll only be launching it once a week to sync newly-saved files, and then it'll be shut down again. After that it took several days of leaving my machine on, plugged in, and connected to the fast WiFi at work to re-download all my stuff from Dropbox and from Google Drive, and to reinstall some of the software I use. Now I'm pretty much back to normal except that I have not re-downloaded Scrivener yet. I am holding off because the folks behind Scrivener are insisting that August 30 will be the drop-dead date by which Scrivener 3 for Windows will finally be released. I'm skeptical on this point (the ongoing delay of Scrivener 3 for Windows after the program's release for Mac almost two years ago is a sore point with me), but I'm willing to wait, especially since at this point I'm not planning to do any drafting work until fall. Scrivener is the program where I do all of my drafting when it comes to fiction, so I can wait to get it back. (Unless they miss another deadline, in which case I may say "To hell with it" and go back to using LibreOffice for everything.

Anyway, that's the reason for the complete radio silence on the blog front. As of today, though, things seem back to normal (I hope!), so...onward and upward! Zap! Pow!! 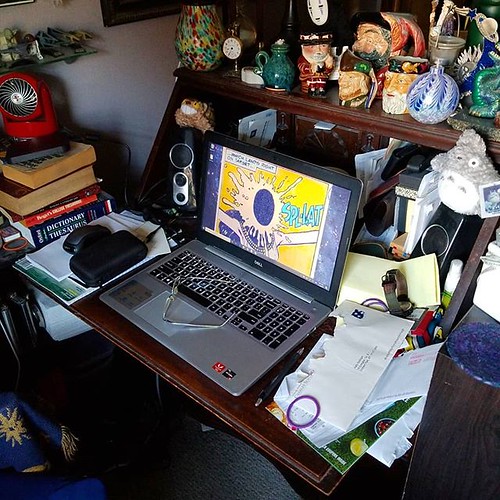 And here I thought you were out boozing and doing all sorts of wild things!