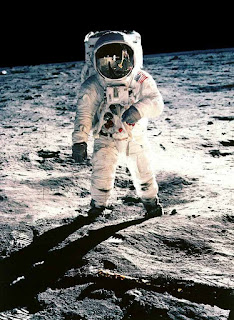 Mallory O’Brian: And we went to the moon. Do we really have to go to Mars?

Sam Seaborn: ‘Cause it’s next. ‘Cause we came out of the cave, and we looked over the hill and we saw fire; and we crossed the ocean and we pioneered the west, and we took to the sky. The history of man is hung on a timeline of exploration and this is what’s next.

--from "Galileo Five", season two of The West Wing, written by Aaron Sorkin


Anniversaries are a good thing, even if they're leavened with the weight of years of thwarted expectations and deferred dreams, as the First Lunar Landing's is: Why have we never gone back? Why are we stuck in low-Earth orbit? Was it all just politics and none of it the call of the stars?

But such anniversaries are a bit of a balm in times such as these, when humanity seems bound and determined to roll back on itself like some kind of distended, drunken serpent consuming its own tail in a weird and awful version of an ouroboros. We can look back on the Apollo missions as a reminder of the kinds of things humanity can do when the primary motive isn't necessarily profit.

I was born in September 1971, which means that I have never lived in a world where the Moon was not a place where humans have gone. I hope that I live to see a day when the Moon is no longer the only place other than Earth that we've gone. 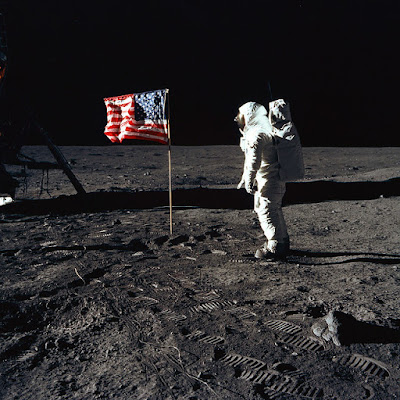 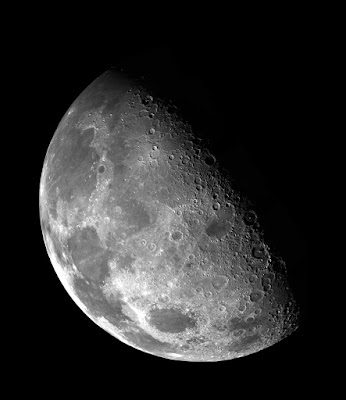 It's a sultry night in July. You've fallen asleep in the armchair. Abruptly, you startle awake, disoriented. The television set is on, but not the sound. You strain to understand what you're seeing. Two ghostly white figures in coveralls and helmets are softly dancing under a pitch-black sky. They make strange little skipping motions, which propel them upward amid barely perceptible clouds of dust. But something is wrong. They take too long to come down. Encumbered as they are, they seem to be flying -- a little. You rub your eyes, but the dreamlike tableau persists.

Of all the events surrounding Apollo 11's landing on the Moon on July 20, 1969, my most vivid recollection is its unreal quality. Neil Armstrong and Buzz Aldrin shuffled along the gray, dusty lunar surface, the Earth looming large in their sky, while Michael Collins, now the Moon's own moon, orbited above them in lonely vigil. Yes, it was an astonishing technical achievement and a triumph for the United States. Yes, as Armstrong said as he first alighted, this was a historic step for the human species. But if you turned off the byplay between Mission Control and the Sea of Tranquility, with its deliberately mundane and routine chatter, you could glimpse that we humans had entered the realm of myth and legend.

We knew the Moon from our earliest days. It was there when our ancestors descended from the trees into the savannahs, when we learned to walk upright, when we first devised stone tools, when we domesticated fire, when we invented agriculture and built cities and set out to subdue the Earth. Folklore and popular songs celebrate a mysterious connection between the Moon and love. The word "month" and the second day of the week are both named after the Moon. Its waxing and waning -- from crescent to full to crescent to new -- was widely understood as a celestial metaphor of death and rebirth. It was connected with the ovulation cycle of women, which has nearly the same period -- as the word "menstruation" (Latin mensis = month, from the word "to measure") reminds us. Those who sleep in moonlight go mad; the connection is preserved in the English word "lunatic". In the old Persian story, a vizier renowned for his wisdom is asked which is more useful, the Sun or the Moon. "The Moon," he answers, "because the Sun shines in daytime, when it's light out anyway." Especially when we lived out-of-doors, it was a major -- if oddly tangible -- presence in our lives.

The Moon was a metaphor for the unattainable: "You might as well ask for the Moon," they used to say. Or "You can no more do that than fly to the Moon." For most of our history, we had no idea what it was. A spirit? A god? A thing? It didn't look like something big far away, but more like something small nearby -- something the size of a plate, maybe, hanging in the sky a little above our heads. Ancient Greek philosophers debated the propositon "that the Moon is exactly as large as it looks" (betraying a hopeless confusion between linear and angular size). Walking on the Moon would somehow have seemed a screwball idea; it made more sense to imagine somehow climbing up into the sky on a ladder or on the back of a giant bird, grabbing the Moon, and bringing it down to Earth. Nobody ever succeeded, although there were myths aplenty about heroes who had tried.

Not until a few centuries ago did the idea of the Moon as a place, a quarter-million miles away, gain wide currency. And in that brief flicker of time, we've gone from the earliest steps in understanding the Moon's nature to walking and joy-riding on its surface. We calculated how objects move in space; liquefied oxygen from the air; invented big rockets, telemetry, reliable electronics, inertial guidance, and much else. Then we sailed out into the sky.

The Moon is no longer unattainable. A dozen humans, all Americans, have made those odd bouncing motions they called "moonwalks" on the crunchy, cratered, ancient gray lava -- beginning on that July day in 1969. But since 1972, no one from any nation has ventured back. Indeed, none of us has gone anywhere since the glory days of Apollo except into low Earth orbit -- like a toddler who takes a few tentative steps outward and then, breathless, retreats to the safety of his mother's skirts.

Once upon a time, we soared into the Solar System. For a few years. Then we hurried back. Why? What happened? What was Apollo really about?

For me, the most ironic token of that moment in history is the plaque signed by President Richard M. Nixon that Apollo 11 took to the Moon. It reads: "We came in peace for all mankind." As the United States was dropping 7.5 megatons of conventional explosives on small nations in Southeast Asia, we congratulated ourselves on our humanity: We would harm no one on a lifeless rock. That plaque is there still, attached to the base of the Apollo 11 Lunar Module, on the airless desolation of the Sea of Tranquility. If no one disturbs it, it will still be readable millions of years from now.

Six more missions followed Apollo 11, all but one of which successfully landed on the lunar surface. Apollo 17 was the first to carry a scientist. As soon as he got there, the program was canceled. The first scientist and the last human to land on the Moon were the same person. The program had already served its purpose that July night in 1969. The half-dozen subsequent missions were just momentum.

Apollo was not mainly about science. It was not even mainly about space. Apollo was about ideological confrontation and nuclear war -- often described by such euphemisms as world "leadership" and national "prestige". Nevertheless, good space science was done. We now know much more about the composition, age, and history of the Moon and the origin of the lunar landforms. We have made progress in understanding where the Moon came from. Some of us have used lunar cratering statistics to better understand the Earth at the time of the origin of life. But more important than any of this, Apollo provided an aegis, an umbrella under which brilliantly engineered robot spacecraft were dispatched throughout the Solar System, making that preliminary reconnaissance of dozens of worlds. The offspring of Apollo have now reached the planetary frontiers.

If not for Apollo -- and, therefore, if not for the political purpose it served -- I doubt whether the historic American expeditions of exploration and discovery throughout the Solar System would have occurred. The Mariners, Vikings, Pioneers, Voyagers, and Galileo are among the gifts of Apollo. Magellan and Cassini are more distant descendants. Something similar is true for the pioneering Soviet efforts in Solar System exploration, including the first soft landings of robot spacecraft -- Luna 9, Mars 3, Venera 8 -- on other worlds.

Apollo conveyed a confidence, energy, and breadth of vision that did capture the imagination of the world. That too was part of its purpose. It inspired an optimism about technology, an enthusiasm for the future. If we could fly to the Moon, as so many have asked, what else were we capable of? Even those who opposed the policies and actions of the United States -- even those who thought the worst of us -- acknowledged the genius and heroism of the Apollo program. With Apollo, the United States touched greatness.

When you pack your bags for a big trip, you never know what's in store for you. The Apollo astronauts on their way to and from the Moon photographed their home planet. It was a natural thing to do, but it had consequences that few foresaw. For the first time, the inhabitants of Earth could see their world from above -- the whole Earth, the Earth in color, the Earth as exquisite spinning white and blue ball set against the vast darkness of space. Those images helped awaken our slumbering planetary consciousness. They provide incontestable evidence that we all share the same vulnerable planet. They remind us of what is important and what is not. They were the harbingers of Voyager's pale blue dot.

We may have found that perspective just in time, just as our technology threatens the habitability of our world. Whatever the reason we first mustered the Apollo program, however mired it was in Cold War nationalism and the instruments of death, the inescapable recognition of the unity and fragility of the Earth is its clear and luminous dividend, the unexpected final gift of Apollo. What began in deadly competition has helped us to see that global cooperation is the essential precondition for our survival.

It's time to hit the road again. 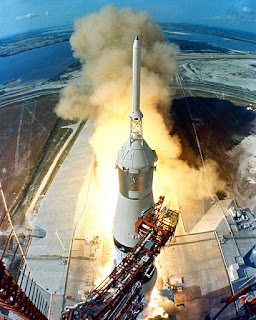 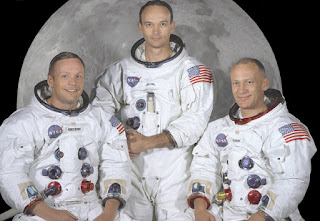 Footage of Walter Cronkite's live broadcast of the lunar landing. Note his happy amazement at what he gets to report, at the 1:58 mark. He takes off his glasses, shakes his head, and smiles at the person next to him. I can't help contrasting that with another moment when, while reporting on air, he had to remove his glasses and shake his head with disbelief, less than six years prior to this moment.


And I know it's not the right mission, but for the movie Apollo 13, James Horner managed to really catch some of the unbridled optimism of the entire Apollo era. 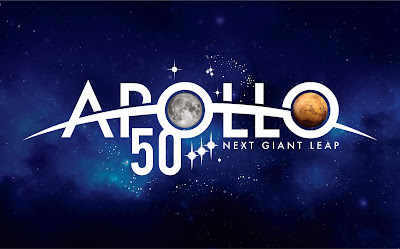 scrawled here by Kelly Sedinger at 8:37 AM