I first remember Combos showing up in the 1980s, but from what I'm reading online they actually came out in the 1970s. Maybe the 80s were when the first big marketing push happened. If you've never had Combos, well...you really need to get out the cave you're living in. They are a salty snack made by filling little tubes of either pretzel, cracker, or tortilla with some filling or other. Usually it's cheese-related.

SeriousEats offers this, by way of description:

Created in the '70s, Combos have become a staple of rest stop gas stations. They're marketed as the perfect driving food—75% of all Combos sales occur in gas stations**—and those marketers may well be right. They're baked, so they don't get your fingers greasy the way potato chips do, allowing you to maintain proper grippage on the steering wheel as you maneuver through perilous long, straight, highways. They're heartier and more texturally varied than most bagged snacks. They provide just enough interesting structural and procedural challenges to keep you occupied until the next game of Mad Libs, while not so many that you get distracted from driving. They also come in over a dozen flavors that range from "That makes sense" to "WTF, buffalo?"

**According to the statistics I just completely made up

There's a lot of truth to this. Combos really do taste better when eaten in a car, preferably with something carbonated with which to wash them down. I'd estimate that over 90% of the Combos I've ever eaten were consumed in the car. My favorite flavor is the Pepperoni Pizza version (not to confused with Pizzeria Pretzel), but really--I'll pretty much eat any flavor of the things. Cases in point: 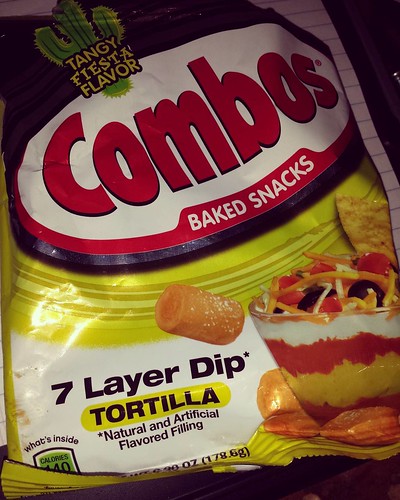 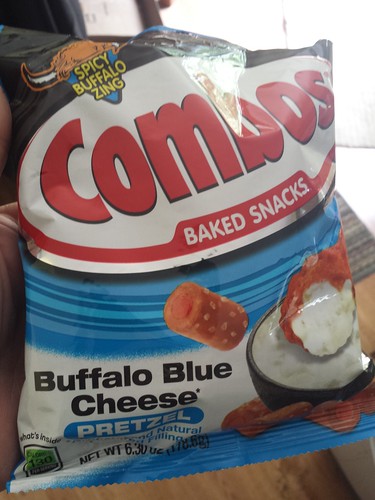 Of the two, I prefer the Seven Layer Dip ones to the Buffalo Blue Cheese ones. You might find that odd, given that I live near Buffalo and am thus supposed to be enamored of all such flavors, but in my experience, the "Buffalo wing" flavor doesn't always exactly translate to other snack foods very well. It's hard to get the vinegary-spicy flavor of the wings AND the blue cheese in there at once; usually what results is too much spice or salt, or the sour flavor of the blue cheese profile overwhelms everything. The Combos fare better in that regard, partly because it's just the filling that's flavored, so the outer pretzel covering ends up "absorbing" some of the overwhelming effects.

Meanwhile, the "Seven Layer Dip" Combos mainly taste like mild salsa and sour cream. Obviously you're not going to get all seven layers in there! The idea is to hint at the flavor of the stuff, not capture it straight out. So these Combos (with their tortilla shell) are more suggestive of a seven layer dip than actually taste like one outright. And I can respect that: This is a bite-sized snack food, after all.

So there we are! What snack foods shall I try next? It's a wonderful salty munchy world out there!