Come on, ONE of you has gotta go!

This United Airlines fiasco is quite the thing, from the bizarre legality of a business being allowed to sell more of a product than it can actually provide (most other businesses would be accused of fraud if they tried that), to the police being deployed to enforce the whims of a corporation. For me, the most depressing aspect is all the people online excusing United's behavior, on the basis that "Them's the rules" and "It's in the fine print." Blind acquiescence to corporate authority cannot be that good a thing. (And I'll leave unmentioned the awfulness of some news media outlets deciding to dig into the passenger's past, as if that in any way excuses what's happened to him now. The whole "He's no angel, though" thing has got to stop.)

This fiasco has, though, prompted a lot of hilarious reaction from the Internet, and really, this post is just an excuse for me to post one of these. And here you go: 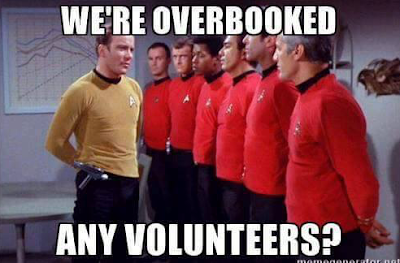 Well, look -- it's pretty obvious which of these guys is going to get "re-accommodated". Looking at the line of redshirts, do you notice anything distinctive about the third guy from the left?