Are you there, collar?

Here’s a weird thing about me: In general, I hate collared shirts.

Now, this might seem slightly confusing since to anyone who pays attention, I clearly own a number of collared shirts. But I have some specific preferences thereof.

Growing up as a kid, I detested collared shirts and I never wore them unless I was specifically ordered to by my parents. I seem to recall that this occasionally vexed my father. In third or fourth grade there was a time when he thought he’d add flannel shirts to my wardrobe, and I resisted this with some vehemence. It wasn’t so much the flannel – although they were brand new shirts, very scratchy – but the stiff collars. I probably wore those shirts a total of twice, both times when I was under orders to do so, and that was that.

What’s my issue with collars? Well, I don’t think that collars generally work well with people who don’t have long or slender necks. My neck is neither of those things, so a collar is always this stiff, annoying thing that’s rubbing all over the sides of my neck and my chin hits it and so on. Plus, collared shirts tend to be made of stiff fabric that doesn’t give terribly well, and they’re mainly designed to be worn with ties, an article of clothing for which I have zero use.

(Seriously. I own, I think, a total of two neckties, and I haven’t worn either one in over thirteen years. In fact, at this point I’m not sure I’d remember how to tie one. I can’t stand the damn things. They’re a useless long triangle of cloth that dangles over your stomach, that always has to be adjusted and fidgeted with, and serves no purpose at all. Ties, in my opinion, can all go to hell, except for bow ties with tuxes. Those look good. Oh, and screw other bow ties too.)

And I hate polo shirts too, because their collars never ever ever look good on me. They’re either too stiff or they lay weird and yuck.

My general feeling is that regular collars and polo shirts don't look on me so much like these guys... 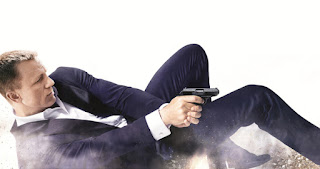 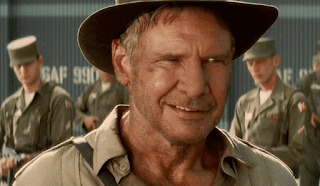 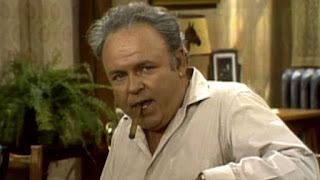 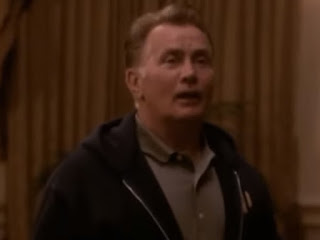 Not that there's anything wrong with those fellows, but nobody's purposely dressing like Archie Bunker or Jed Bartlet, is what I'm saying.

Now, I do make one exception to my hatred of collars: button-down collars don’t bother me. In fact, I’ve come to like them rather a lot! Collars that are buttoned down tend to be a little narrower anyway, so they do tend to stay in position and maintain a shape better, and they don’t tend to rise up and rub my chin. Here’s the outfit I wore the other day when The Wife and I were in Ithaca. I bought this shirt for a pittance at a thrift store, and I quite like the way this turned out. 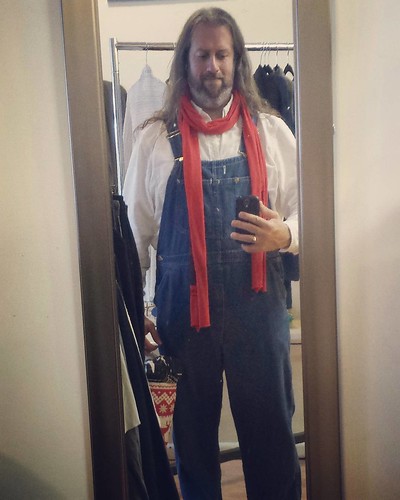 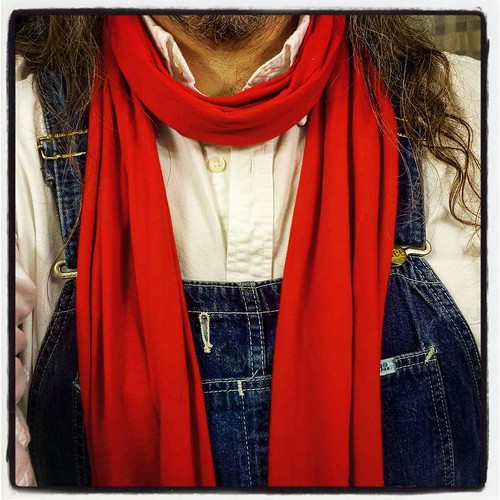 And I have several other button-down collar shirts, either denim or twill. Denim tends to be a special case, and I am willing to wear non-buttoned-down collars in denim or in a nice twill. Regular shirt fabric, though? Not so much. 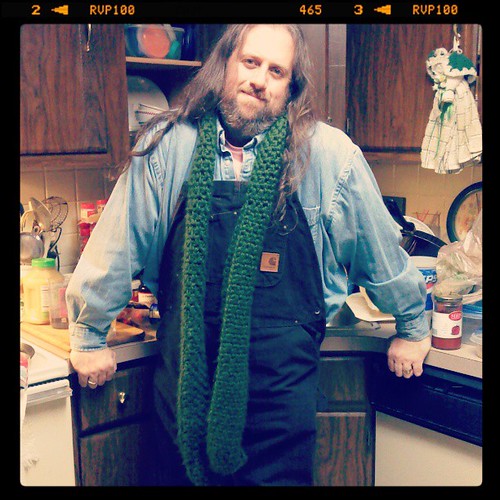 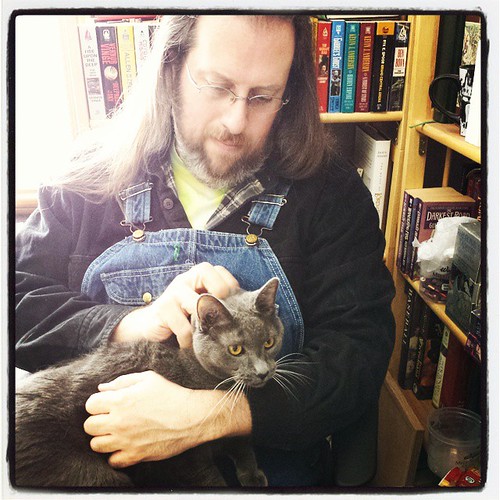 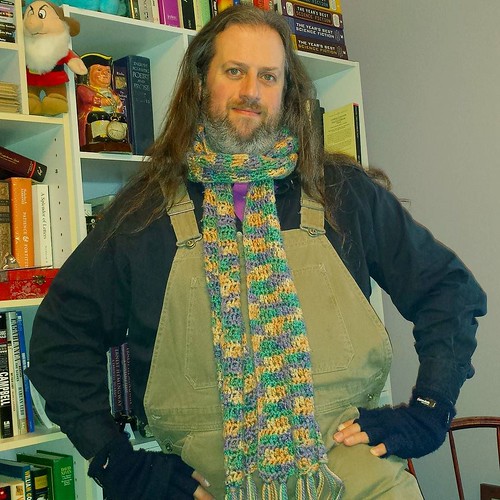 I have a green plaid-stripe twill shirt that I haven't even photographed yet. I'll be wearing more of this stuff as cooler temperatures arrive.

And that brings me to my newest thing: collarless shirts! Yup, that’s a thing, and I love it. I know, I know – you’ve all been aware of this kind of thing for years, but bear with me. With collarless shirts I can have the nice look of a button-up shirt without the annoying discomfort of a stupid wing collar, and I can look nice without the annoying necessity of a necktie. I’ve recently bought three collarless shirts on eBay, and I like them all. I have a red plaid one, a white one with pinstripes, and a pleasant yellow/peach one. These all make me happy and I look forward to wearing them more, moving forward! 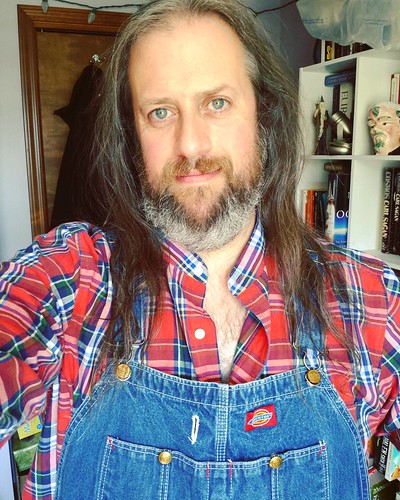 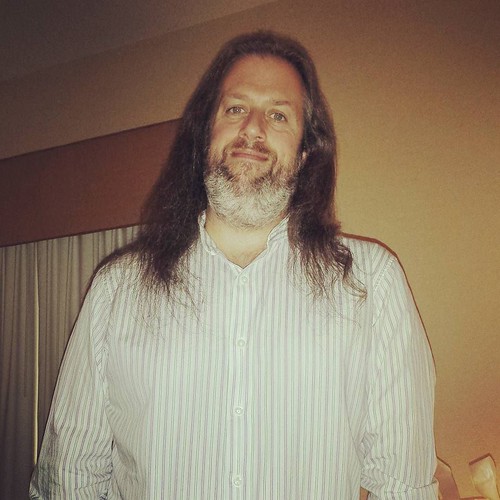 (I'll have a better photo of that one eventually...the lighting in the hotel room where I took the photo was ghastly for this purpose.) 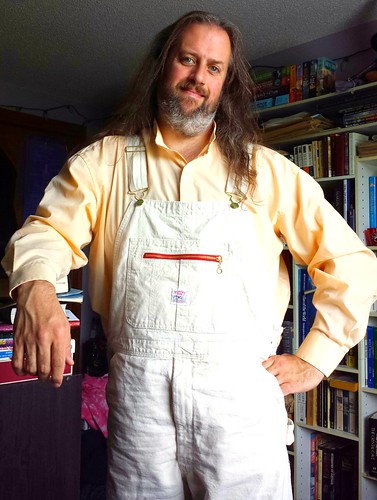 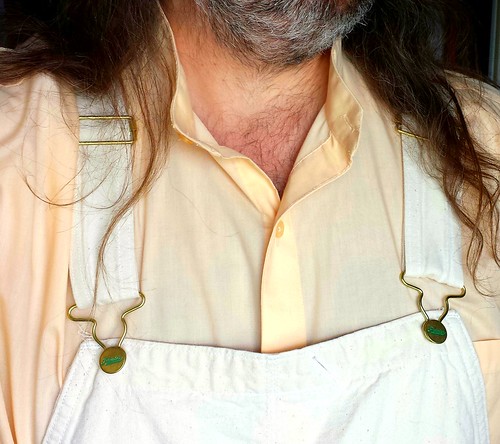 And then there’s this flannel button-down, which I also got for just a couple bucks at the thrift place. I haven’t made up my mind on this one yet, but it was three bucks, so hey, why not? 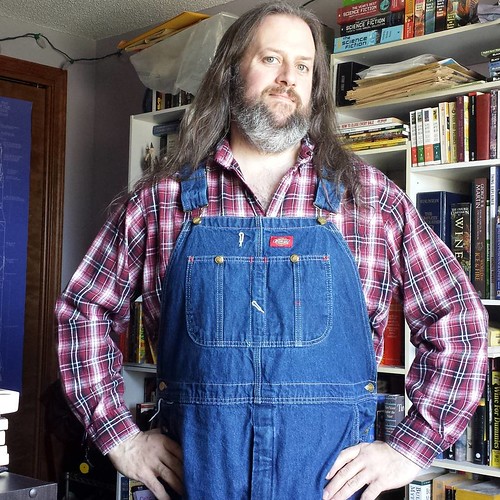 So basically, I hate collars except for when I don’t.

I’m glad I took an entire blog post to say that....
scrawled here by Kelly Sedinger at 8:00 AM

So that annual question you do - you DO care about fashion!

Roger: Well, a little! I care about what I put on and I don't want to look like a slob, even as I dress fairly idiosyncratically. But as far as "fashion" dictates what's "in" and what's "out" every year, I honestly have zero use for that.