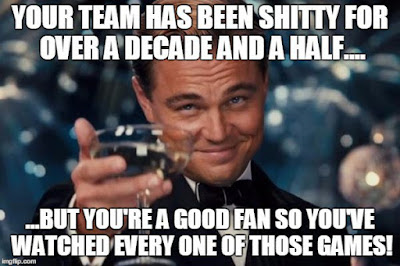 Here’s some math. An NFL game takes roughly three hours to play. So if you watch every single play of each of your team’s sixteen regular-season NFL games, at season’s end you will have watched 48 hours of football. That’s two entire days of your year, spent watching the games.

And if you are a Buffalo Bills fan, and if you have been faithful enough over these sixteen years to watch every Bills game even while they’ve been mostly stinking the whole time, that’s two days spent per year for sixteen years. That’s thirty-two days of watching mostly bad football. Which is more than a month.

Hey, it's your time. Far be it from me to suggest that you might consider spending it doing something that doesn't bring more annoyance than joy.

I turned on the game last night in the 4th Q, hoping the Texans would score just once v the Patriots. Alas, no.