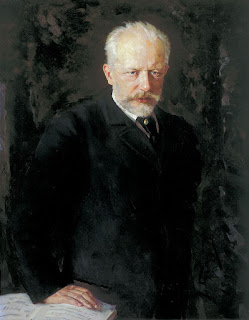 I've always had a difficult relationship with Tchaikovsky, but over the last few years, I find myself more and more attuned to him. His famous Piano Concerto No. 1 remains a work that vexes the hell out of me, but I like parts of it enough to outweigh the things I find difficult in it; the 1812 Overture and the Capriccio Italien remain fun potboilers, even if the former is really twice as long as it needs to be. Tchaikovsky's symphonies, though? Well, even there I've always had trouble. For one thing, even though he wrote six total, it's the last three that show up on frequent programs; in fact, until I did listening for this post, I'd never even heard the first three. I disliked the Fourth for years (only now changing my opinion), and the Sixth was nice but didn't really do a whole lot for me. (I've yet to relisten to it for this series, but I'm looking forward to it.) What started my transition on Tchaikovsky (whose ballet music I have always loved) was the Fifth Symphony, which I've always liked and which a few years ago grabbed my heart in a way that few works ever have...but we'll get to that.

Tchaikovsky was the consummate tortured Russian Romantic who poured the struggles of his soul into his art. His life was one of constant turmoil, and his relationships were stormy and too often ended in death or, in the case of his patron Nadezhda von Meck, the enigmatic and sudden ending of the relationship with no real explanation. Tchaikovsky was also homosexual at a time when that was not a thing to be, and some think that his death -- from cholera which resulted from his drinking unboiled water during an epidemic -- was at least partly suicidal.

From all this arose some of the most enduring and popular works of classical music ever written, including the last three symphonies. The first three, however, are interesting and fine works in their own right, so I decided to go ahead and just include them all in the course of this series. That's partly why I took a break from these posts for two weeks: I had catchup listening to do!

So, what of Tchaikovsky's Symphony No. 1? It was his first (obviously) real foray into the world of large-scale symphonic works, which he began composing shortly after entering conservatory. As a youthful work, it does show some signs of inexperience at times, but Tchaikovsky's gift for soaring, singing melody is evident early on, and there are some very interesting uses of orchestral color as well. (Russian composers always seem to know how to use the orchestra in the most amazing ways.)

Tchaikovsky's work on the symphony was not easy, though. Here's a brief account, from Wikipedia:

Tchaikovsky started writing this symphony in March 1866. Work proved sluggish. A scathing review by César Cui of the cantata he had written as a graduation piece from the St. Petersburg Conservatory shattered his morale. He also composed day and night. All these factors strained Tchaikovsky's mental and physical health tremendously. He started suffering from insomnia, from pains in his head which he thought to be strokes, and became convinced he would not live to finish the symphony.[5] A successful performance of his revised Overture in F in St. Petersburg lifted his spirits. So did a change of scene for the summer with his family. Nevertheless, he soon worked himself again into nervous and physical exhaustion by continuing to compose day and night. A doctor declared him "one step away from insanity," ordering complete rest. Tchaikovsky complied.

Ouch. Tchaikovsky was also handicapped by teachers who criticized the work heavily for its awkward use of the traditional rules of sonata-allegro form, rules which Tchaikovsky felt too constrictive for his own natural abilities as a composer. Still, he finished the symphony, and now, hearing it recently for the first time -- yes, it's youthful. No, it's not the equal of what was to come. But it's still a fine work that I'm glad to have finally heard!


scrawled here by Kelly Sedinger at 8:58 AM

I never heard it before. I guess I like it, though it probably requires another listen.