Have I ever mentioned my deep and abiding love of waffles? Maybe I have, but here I go again: 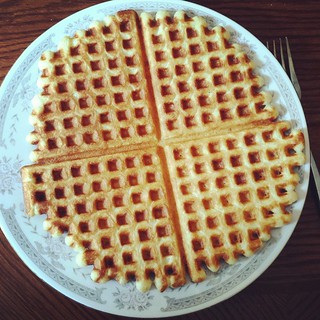 Fluffy, crunchy waffles dripping with real maple syrup. Belgian waffles with a scoop of vanilla ice cream and hot fudge. Traditional square waffles with a couple of pieces of fried chicken and some maple hot sauce to go with the maple syrup. And that's not all! How about waffle sandwiches? Ham and swiss on two toasted pieces of waffle, dipped into syrup or jam? That's like a Monte Cristo sandwich but with waffles instead of French toast! Oh, and blueberry waffles. Boy howdy!

Our first waffle iron was probably a wedding gift -- I honestly don't remember -- and it was a decent enough machine. It likely still works, actually. It's sitting in the garage right now, and I should probably clean it up and send it on its way to another waffle-loving but waffle-deprived household. This iron became superfluous when my mother-in-law gave us her old iron, presumably because she wasn't using it much anymore.

Now, I'm generally of the view that with some things, older really is better. Waffle irons are a good example. Over time the metal grates should take on a rich patina of seasoning, giving you that wonderful crunch that you can really only get with an old waffle iron. This one definitely has the feel of an old appliance. Its cord is ungrounded, the knob that adjusts the temperature has a certain looseness to it -- the looseness of old knobs, the "loose but not likely to fall off" kind of looseness -- and the silver exterior is worn and scratched and looks like it's been in various homes for years. Which, indeed, it has.

And it turns out amazing waffles. 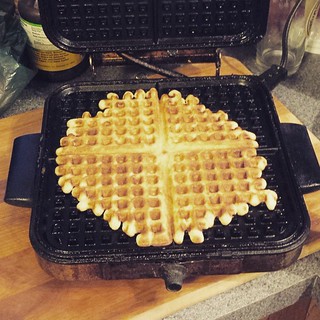 I know, Alton Brown's waffles episode of Good Eats weighs in pretty definitively in favor of circular waffle irons instead of square ones (it has to do with the circle being a better shape for efficient heat transfer to the batter), but I love this old beast, I love the product it turns out, and I love that it's a connection to my mother-in-law.

One problem, though: we can't use it anymore. At least, not for Family Waffle Night. I can use the old one for when The Daughter and I want waffles, but if we're including The Wife, this one is off the table, because she is on a gluten-free diet. That being the case, she is too wary of not being able to clean the grates of the old iron sufficiently well to convert it to gluten-free batter. For this reason our waffle nights have decreased dramatically over the last couple of years. The few times we've had waffles, she's made waffles for us and pancakes for herself, and that's a fairly annoying amount of work.

Thus it came to pass that leading up to this past Mothers Day, I got in the market for a new waffle iron which she'd be able to employ in the baking of gluten-free waffles. After some shopping and comparing, I ended up at Williams-Sonoma and dropped over a hundred bucks on this bad boy: 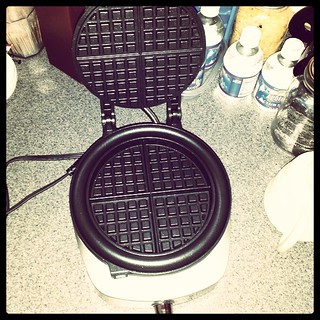 I have no regrets, regarding the sticker price. None at all. For something like this, a device to make a food we love and like to have often (especially in the colder months), I'd rather spend a lot and get a good iron than some cheap $30 thing from Target where the construction is part-plastic and the lid doesn't seem to settle down snugly over the bottom and so on.

How were the waffles from this iron? Quite good, actually! It'll take years for the iron to develop that nice old patina, but it'll get there. Meantime, we can all have waffles now. 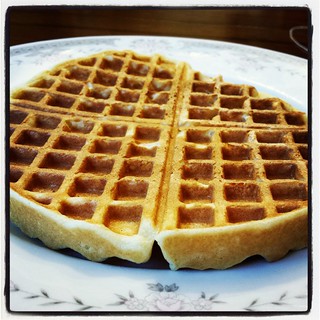 Now I need to figure out how to make gluten-free fried chicken.... 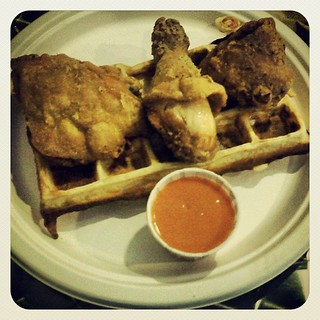 One of my sisters has the waffle iron we grew up with. I replaced the cord - it was badly frayed - but it's otherwise fine. So it's more than 50 years old.;