From the Books: "I Never Met a Story I Didn't Like" 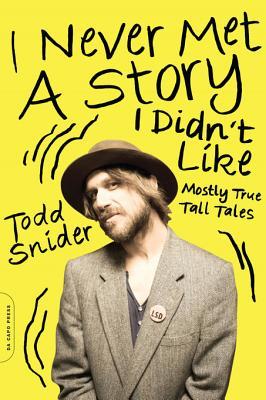 I borrowed this book from the library a few weeks ago, and after plowing through it (and finding it quite hilarious), I reviewed in on Goodreads. But for this space I wanted to excerpt a particular chapter that I found interesting. Author Todd Snider is a folk singer by trade, so his advice here is directed specifically at singers, but I think it can be applied to anyone in a creative endeavor.


Young singers sometimes think it's about making people like you, but it's not. It's about how many people you can get to decide whether or not they like you. That's what you have to do to fill your refrigerator. Do it every day, nine to five.

You are not trying to be liked. You are trying to be judged, as often as you possibly can, so you can keep your refrigerator full.

If I was better at what i did, people would say nastier things about me.

The truth of this is that you asked someone -- everyone -- to feel something. And if they do feel something, you do not get to control what that feeling is. Whether it's a fan, your mom, a journalist, or the paper boy, you sing them your song and ask them to feel. Don't be a dick and try to control what and how they feel after that. Do the world a favor and leave those people alone. They already did you the favor of listening to your whole f***ing song. Now you want to tell them to do something else? Or you want to be angry because they did what you asked them to do? Jesus Christ.

When my first record came out, I saw a review of myself. The writer began, "I hate Todd Snider." That was the first line of the review. It got me past my waist into the water. Come on in, kid, the water is freezing. "I hate Todd Snider, and I'm about to tell you why," was the full first line, in a San Diego newspaper article that was supposed to be previewing my show. When's the last time someone told you they hated you, un-ironically? Teenage girls don't count.

I wrote a letter back to the person who wrote that review. I still have the letter. I pull it out and read it when I need to feel embarrassed for myself.

Making up songs, critics will tell people that you've done well or poorly. Again, those are the critics that you have asked -- begged, really -- to have an opinion. And then they give you one, if you're lucky. A bad review is a good review. The worst review they can give you is no review at all, and that's the one they give almost everybody.

That's an interesting notion: by reacting to your work at all, someone is doing you a favor, even if they think your work is the worst thing ever and they are willing to tell people that. I'm not entirely sure I agree here, but the general notion seems to be that if you're going to be an artist, you do not want to inspire indifference, and that's something I completely agree with.

(Good book, by the way, if you're interested in stories from the world of country-folk music.)

Wow, Todd Snider... I have his debut album from 20-some years ago and haven't really heard anything from him since. Always thought his songwriting was funny, so it makes sense his book would be as well.

And I think I generally agree with his perspective... getting some kind of reaction as an artist is better than indifference.