Wow, 2014 is just about in the books. And what a year it was! Here, without further ado or whatnot, is my annual Year’s End Quiz Thing!

I just keep my resolutions the same: read a lot, write a lot, do fun stuff. That’s all I need. In 2015, though, I will be doubling down on writing.

Resolutions always seem kind of vague to me. I prefer goals, and I set a big one for 2014: 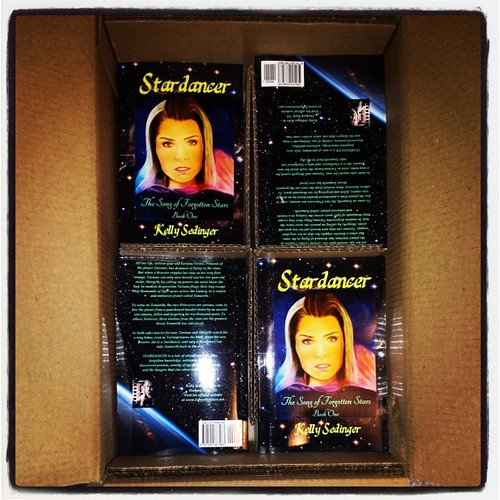 Nope. A few coworkers that I’m not terribly close to, but that’s about it.

No, thankfully. Two brothers, though, who are among my best friends lost their father, though, so that was a tough period.

Physically, I never left the United States this year. Mentally, though, I left it daily! In fact, I left Planet Earth on a nearly daily basis.

Hmmmm...seems to me I got something pretty big done, now what was it...geez, what was that...oh yeah!

Sometimes I mentally undervalue getting Stardancer out, but...dammit, that was a real thing I did there, wasn’t it? The story that has been consuming my heart for four years now, and which continues to march onward, finally got out there for other people to read. It’s a hell of a thing.

And you know you had a hell of a year when you have an accomplishment that actually outranks “moved into our first house” on the Awesome Scale.

Not finishing the draft of The Adventures of Lighthouse Boy, I suppose. And we’re still not completely moved in yet!

The bookshelves for my personal library. At long last, I can see and access all of my books. It’s amazing!

(Possible honorable mention: the dee-oh-gee, if you consider him to be a ‘purchase’. We adopted him, and there was an adoption fee, but I’m not sure we count that as a purchase.)

As always, The Wife and The Daughter.

Let’s just say that as a person on the left side of the political fence, this was not a banner year for sane political action in the United States.

Well, we moved. There went a big chunk!

Releasing a book and moving!

Maybe fatter by a couple of pounds, as I write this. Not by much, though, and that’ll start to come off again as the holidays recede and I stop eating like every day is some kind of grand Bacchanalia.

Richer. Not by much, but we’re doing OK, and I’m hopefully getting a foundation built for a future writing career.

I always wish I’d written and read more. I never ever ever feel that I’ve done enough of those things.

Wasting time on the Internet: it’s all your fault, people! Also, responding to people in comments who simply aren’t worth the time or effort.

At home, with the family. The way it should be. (We never got our tree up this year, owing to a few logistical and scheduling issues that bit us, along with a short Christmas season and that big storm a few weeks back that threw everything into flux around these parts.)

This year? Person of Interest and Castle. We’ve recently discovered Veronica Mars and Cutthroat Kitchen. Other than those, really, we haven’t made any major discoveries of late.

I don’t hate. I just don’t. I did form several visceral dislikes, but that’s about it.

Joyland by Stephen King; Where Nobody Knows Your Name by John Feinstein.

It’s provisional, but I am thus far impressed greatly by the country music trio The Band Perry.

A house, a library of my own, and books with my name in the byline. Oh, and scarves.

Somehow I managed to go the entire year without getting a pie in the face from The Wife! It just didn’t work out in terms of scheduling. Maybe next year, I hope! (My sole pieing this year was, as part of a ‘challenge’ thing, self-inflicted.)

How would you describe your personal fashion concept in 2014?

Does it ever change? All overalls, all the time. And scarves. I’m getting seriously into scarves. And fingerless gloves. Those are pretty cool.

Finally having enough space to live; finally getting a sense that I’m moving toward something; and after initial trepidation, having a dog helped.

This was not a year for loss. A welcome thing, that – loss will come again. But this year, it held off.

I couldn’t pick just one! So many amazing people, both online and off. What a fantastic world!

This is a new question that I’m adding, since I saw it on Tumblr. Here I am, in various states from pie-faced to water-soaked to just plain happy about stuff. 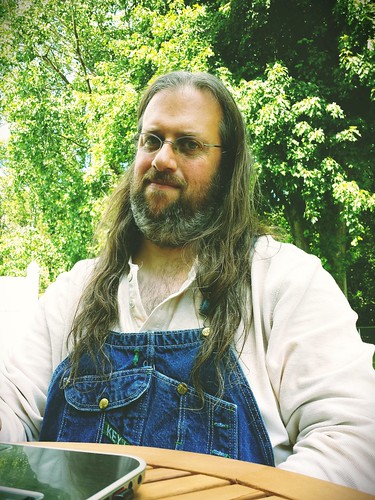 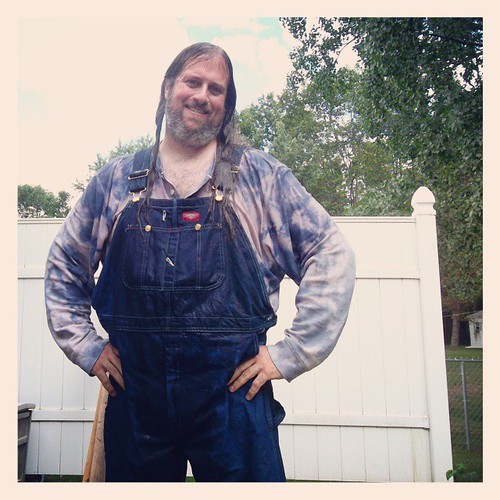 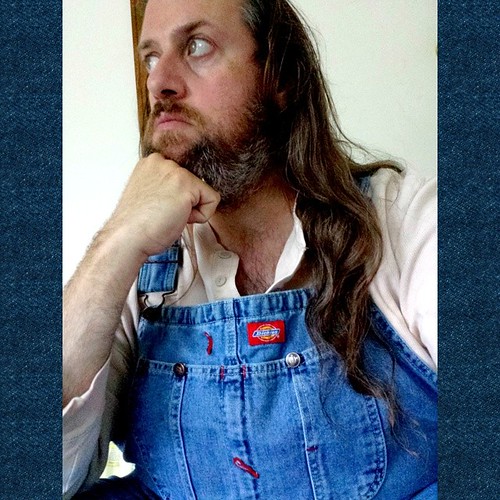 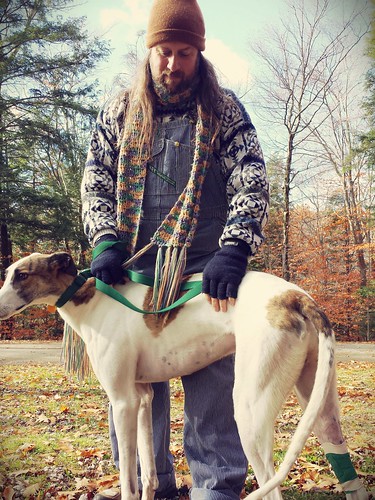 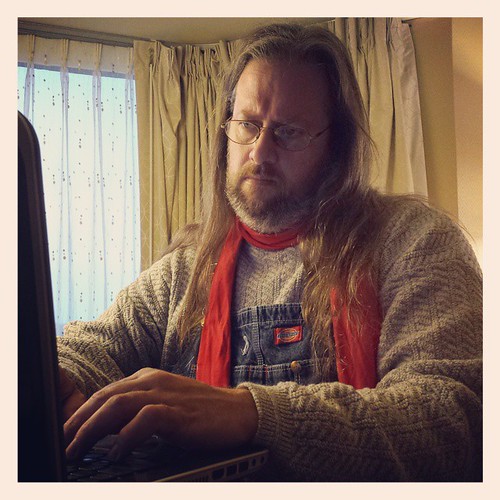 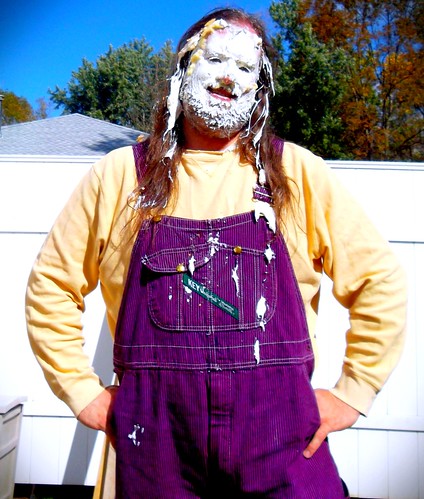 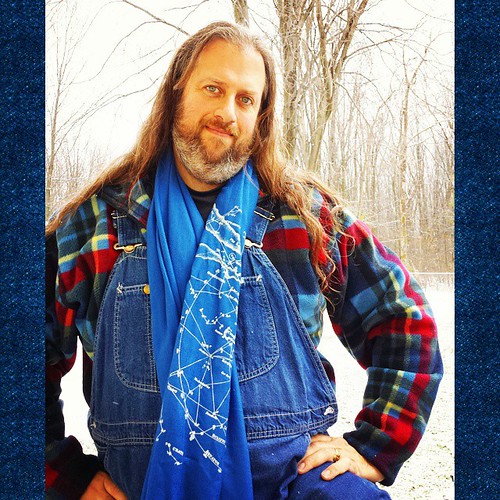 Tell us a valuable life lesson you learned in 2014:

And the usual ones: Read a lot, write a lot. Go for walks and look at sunsets. Take all the pictures you want. Learn new things and try new stuff. If you have a dog, take him for walks. Buy books for your daughter, even when she complains that she likes to pick her own books (let her do that, too). Nothing fits your hand so well as your lover’s hand. Eating out is fine, but learn to cook things, too. Have a place to go where they know you and what you order. Don’t be afraid to revisit your childhood passions now and again; you weren’t always wrong back then. Overalls are awesome, it’s OK to wear double denim, and a pie in the face is a wonderful thing!

Hmmm, what song to use? It seems pretty obvious to me, after its use in my favorite movie of the year:

Lips as sweet as candy
Its taste is on my mind
Girl, you got me thirsty
For another cup o' wine

Got a bug from you, girl
But I don't need no cure
I just stay a victim
If I can for sure

All the good love
When we're all alone
Keep it up, girl
Yeah, you turn me on