So I've been intrigued for a while about the idea of cold-brewing coffee. This is a method whereby one extracts the flavors and oils from coffee not with hot water, but with cold. (Duh!) Basically, you mix ground coffee and cold water and let it sit out, at room temperature, for a long time: 12 to 24 hours. Then you strain out the coffee, resulting in a concentrated coffee extract that, because it was done at a low temperature, cuts down on the coffee's acidity.

So I acquired a really nice glass bottle, hunted around for recipes (eventually settling on this one), and away I went! Here's the pictorial tale.

First, I measure out coffee: 4.5 oz of it. Which turns out to be quite a bit of coffee. 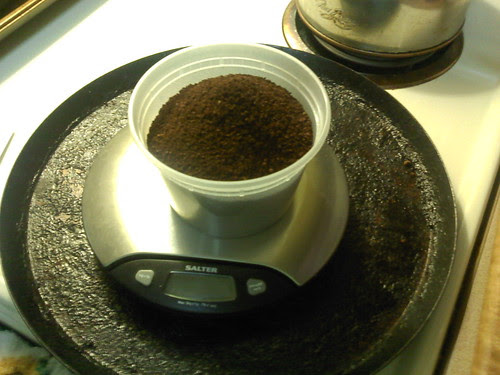 Into the bottle goes the coffee. Most recipes I've looked at say to use a fairly coarse grind, since the long steeping time will be used and since it'll be easier to strain it out later on. 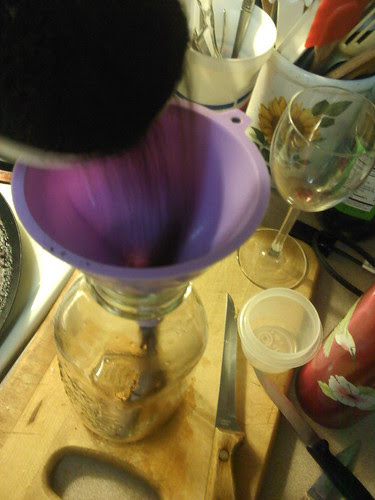 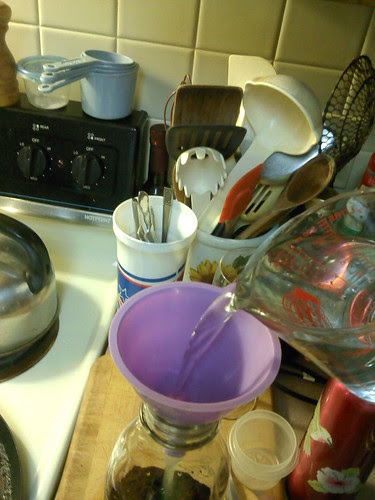 This results in a pretty gross-looking sludge. Don't worry! This is normal. 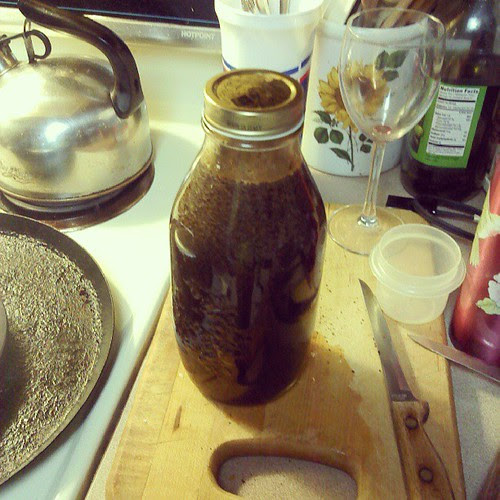 Now came the waiting game. I did the prep part of the job at 4:30 in the afternoon, and I did the straining around 8:00 the next morning.

Straining turned out to be...problematic. The recipe I used said to simply put a standard paper coffee filter into a fine-mesh strainer and pour the sludge through there, slowly, and let it drain into a bowl. The problem is that when I did this, the paper filter clogged up almost immediately; the initial slow pour of coffee slowed in minutes to a slow drip, and then stopped altogether. I tried another filter, and the same thing happened. This was a problem, obviously. So I dispensed with the paper filters: I poured the coffee mixture through the fine-mesh strainer into the bowl, and then, after cleaning the glass bottle, I strained the coffee again, through the same strainer, back into the glass bottle.

The result? Here's my coffee concentrate, after double-straining and several hours of refrigeration. 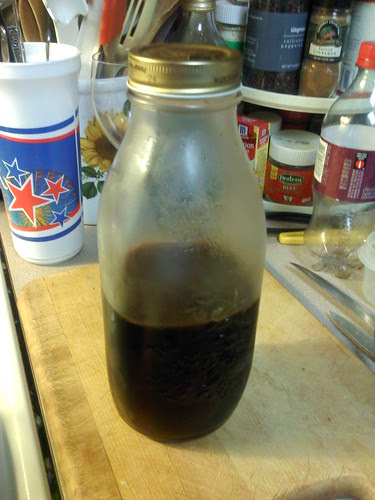 Yes, it's only half the bottle. But it is, after all, a concentrate, so you're not going to use that stuff straight. (Well, I suppose you could, if you wanted to. It's your nervous system, folks. I'm not the bossa you!) The idea is to dilute the coffee concentrate, with whatever it is that you typically like. You could use water, I suppose, but that seems goofy. I used milk, in equal portions. Here's what I ended up with: 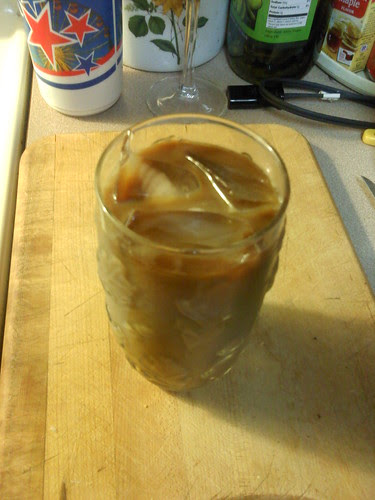 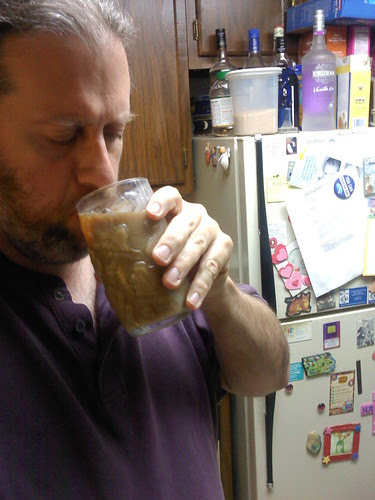 I have to tell you: this is really pretty tasty. In the future I think I'll use the half-size tumbler for this, though; a glass that size is a lot of this stuff to drink at once. And I'm kind of wondering if I don't need to use one percent milk or maybe even two percent, because we only keep skim milk around, and for this kind of drink, I kind of miss the mouth-feel I get from a little bit of fat content.

And of course, there's a virtual galaxy of flavorings I could add to the mix. On a future iteration, I may well try adding a teaspoon of cinnamon to the coffee during the steeping. And if I get into this in a big way, I might start keeping the finished concentrate in smaller glass bottles (of which I have a few floating around, from commercially-prepared iced tea) so I can start the process over again with my main bottle.

I will try this. Thanks for sharing,

Not a coffee fan, but you may find this Kickstarter project on cold brew coffee interesting. Already funded with 17 days to go...

A coffee press might also work to strain it.