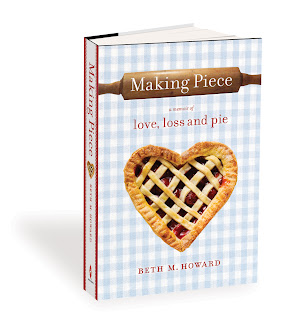 Grief is an odd emotion. It's deeply unpleasant at first, and it pretty much stays unpleasant the longer it's there. But you eventually reach a point where even though it's unpleasant, you don't mind grief all that much, because at least it means that you're remembering. It just becomes a part of the deal, the cost of doing business. It's either accept the grief or force yourself to never, ever indulge the happy memories. Grief is the price of admission to memory.

Obviously I've had to deal with grief a lot over the last seven years (or eight, really – Little Quinn's life brought grief of its own, as soon as it began). One thing I've found is a certain kinship with those others who are visited by grief; it's almost as if, having encountered grief myself, other people somehow become more real to me when I learn that they, too, have encountered it. That seems a bit silly, frankly, but there is a certain 'club' feeling when it comes to loss. You meet people who are grieving, and they become more than other people. They are fellow travelers on a sad road that you're traveling yourself.

One such person is Beth Howard, the blogger behind The World Needs More Pie. I discovered her blog, of all ways, by looking not for fellow travelers in grief but for fellow travelers in overalls. Reading her blog quickly made clear that she had taken on a fairly Quixotic mission for herself: she was an evangelist for the power of pie to heal and to forge connections between people and to just generally make the world a better place. She makes pie constantly, and she teaches people of all walks how to make pie, and she sells or gives away pie. About the only she doesn't do with pie is throw it, but as she blogged once, I've got her covered there, anyway! She does all this in a trusty pair of overalls whilst living in the American Gothic house in Eldon, IA. 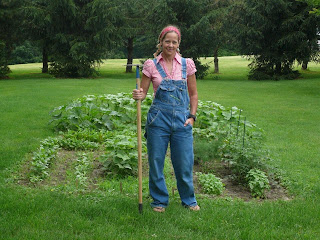 Reading her blog, I soon learned that she was also grieving. Her husband had died, very suddenly, of a heart ailment, just a couple of years ago. It was all very raw for her, and she was still processing it all. She was processing it through making and sharing pie, through caretaking the house in the background of one of the most famous paintings of the last 150 years, and, eventually, through writing a book: Making Piece: A Memoir of Love, Loss, and Pie. I've been lucky enough to get to know Beth Howard a little not just through blogging, but through Facebook and Twitter; I was able to follow her adventure of getting her book published, and it was truly exciting to see it finally come out. (I'm honored to have received a shout-out in her acknowledgments.) It took me a little while to get to reading it myself, but I do recall that I was rather nonplussed by the book's review in the Buffalo News. The reviewer took the book to task for being too much about grief and not enough about pie. But the book's very subtitle puts pie third, behind love and loss. What did that reviewer expect?

It's really very proper that a book that deals with grief should be, to some extent, dominated by grief, because grief dominates. It just does. When grief comes, it comes hard, and it doesn't just demand attention – it commands it. Grief is the only thing you feel, and even as it's awful and unpleasant, there's a strange guilt that sets in when you suddenly realize, for one second, that you're feeling something else. It's almost as if your mind says, "Oh my God, I've stopped grieving for a moment!"

Ultimately, the specific details of any one person's grief are utterly different from any other person's. It's the quality of the experience of grief that is universal. It's in the thousand little ways that grief seems, for a time, to take over one's life. Beth's book captures this very effectively.

The other half of the equation is, of course, dealing with grief. How does one 'move on'? Well, you don't, but that's a story for another time. What you do is find a way to channel the grief into a positive use of energy. In Beth Howard's life, that turns out to be pie: and not just the baking of pie at home, but making a life mission out of pie. She teaches people how to make it, how it brings people together, how many memories can be shared over the making and eating of it. Beth spent quite a lot of time trying to figure out how to best execute her new mission in life: a bakery? A TV show about pie? Her life eventually brings her to Iowa, where she finally comes to live in the American Gothic house. She bakes pie there, runs her little pie stand, and judges pies at county and state fairs, where her attempts to describe her reaction to a French Silk pie in erotic terms doesn't quite make the other ladies on the judging panel happy.

Making Piece is not really a food book. It's a personal narrative, much of which centers on food. It's about injury and healing, and the way food plays a role. There's a zen quality to Beth's writing, and in her approach to her life, in following passions and ideas and interests, and in finding a way through pain by taking pleasure in doing a certain task, over and over again. It's almost as if pie serves the role of a mantra in her life. Making Piece is her confessional: sometimes warm, sometimes raw, sometimes uncomfortable, and always honest and compelling.

True confession time: I have never made my own pie from scratch. This winter, I think it's time to scratch that from my list.
scrawled here by Kelly Sedinger at 10:23 PM

A sense of community really does help when dealing with grief. It's nice to know that the blogging community has helped you doing your time of difficulty.
Thanks for sharing.

Thanks so much for this very nice post, Kelly. And thanks for being such a huge support all these months, through grief, pie and blogging. I had forgotten you found me through an overall search. :-) I'm still wearing mine every day. Many many thanks. --Beth

Thanks very much for this very nice post, Kelly. And thanks for all your support these past months in pie, grief and blogging. I had forgotten you found me through an overall search. ;-) I'm still wearing mine proudly every day. Many, many thanks -- Beth

This is one of those posts that I've already tabbed for September Rambling.