Shiny in the Black: A "Firefly" Christmas (part two) 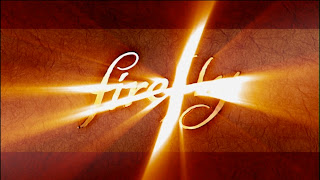 Continuing my fanfic exercise in what a Christmas-themed episode of Firefly might have been like.
part one

"You're getting' more gentle all the time, honey," Zoe said. "You have such a gift for handling sensitive equipment."

"Thanks for sayin' so, my love," Wash replied. "But I could always use more practice--"

"All right, enough of that, you two." Mal came up onto the bridge, fully dressed in his usual brown shirt, brown pants, brown belt, brown holster, brown boots, and probably brown socks too, if one could see them underneath all of that. "Wash, you keep the ship warmed and ready to lift if some part of this job goes south. Zoe, you're coming along."

"Captain," Wash said, "is it really necessary to have contingency plans for this job? We're actually conducting an honest transaction for once."

"Yeah," Mal said. "For once. We don't get a whole lot of practice with this kind of thing, so who knows what might go wrong. You and Kaylee keep the ship ready. River and the Doc will keep you company. Zoe, you'll be with Jayne, the Shepherd, and me."

"Well, I think she's still on her shuttle, writing long entries in her diary about how much she hates me right now."

Zoe knew what that meant. "You told her no clients."

"We ain't got time. Why am I always the bad guy on this?"

Mal and Zoe began to exit the bridge.

"You're going to buy toys," Wash said. "I could use a new stegosaurus for the collection."

The Captain and Zoe left then, and Wash reached into the small footlocker next to his seat and pulled out a handful of his dinosaur figurines.

In the cargo hold, Shepherd Book and Jayne had the cargo hauler ready to go.

"Jayne," Book said, "do you really need that many guns?"

"Preacher, are you carryin' that Bible of yours right now?"

They lifted a crate containing coin up onto the back of the hauler as Mal and Zoe arrived and descended the criss-crossing stairs down to their level.

"A purchase of good will is never a bad purchase," said Book.

"You get that from that Bible of yours?"

"No, it just came to me," Book replied. "A preacher can't live on the words of one book alone."

"Be careful, Captain," Kaylee said as she opened the ship's cargo door and lowered the ramp. Mal, Jayne, Zoe and Book drove off in the hauler. Then Kaylee closed the ship back up. She turned away from the control and nearly jumped out of her skin when she saw that River was standing there, unblinking, just inches away.

"Would you like me to teach you a song?" River asked.

"It goes like this. 'On the first day of Christmas, the operatives brought to me....'"

"Uh, River?" Kaylee interrupted. "Is this one of those creepy songs you learned while you were captive at...that place?"

"Yes," River said. "I guess I should learn some new songs myself."

Mal drove the hauler through a warehouse district of Ariel's main city. Unlike the shiny, wealthy area they had visited a few months earlier – to steal some medicine – this area was much darker and dingier. Every planet, no matter how rich, had parts like this, Mal had long since learned. No one was rich enough to banish dirt and grime forever.

"You know where this warehouse is, right, Book?" Mal asked.

"I've got the address right here," Book said, holding up an electronic data organizer. "And the crate number of the merchandise we're getting. It'll be in and out."

Jayne growled. "Every time one of you people says we'll be in and out, I go through half my ammo. I haven't had an in and out job since--"

"Jayne, I'm sure that's fascinating," Mal cut in. "But just in case it ain't, why don't you hold it to yourself?"

"Sure, Mal," Jayne said. "I'll just sit here and be quiet as usual while you and Zoe tell each other the same stories over and over again. Hey, can I hear that one about that time you both got your asses kicked by the Alliance? I love that one."

"Thank you for clearing us up on the chain of command, Captain," said Shepherd Book. "But we appear to have reached the warehouse."

"All right." Mal brought the hauler to a stop near an entrance. "Standard procedure. Zoe, you'll get us in. Then, Jayne, you're in first, followed by me, then the Shepherd, and Zoe, you bring up the rear. We're going to try and find this crate, get it, and be done with it before anyone knows were here."

"Not usually our thing," Zoe said as she walked to the door.

"Well Jayne, that's six hours since I last regretted hirin' you." Mal smiled. "I think that's a new record for you, ain't it? Hey Zoe, you got that door open yet?"

"Think so, sir," Zoe said as she pressed a button that made the large bay door swing open. "Pretty easy, too."

"Anybody else thinkin' that was a little too easy?" Jayne put in.

Mal shrugged. "Well, we've got guns, so if we get into some local color, we can make our way out."

"There might be armed guards inside," Book pointed out.

"Cold feet, Shepherd?" Mal said. "This was your idea. But we're here, and I'm not in the habit of runnin' away at the first sign of something unexpected, especially if that unexpected thing is something that actually makes my life a little easier. Like an unlocked door. Shepherd, grab the coin. Jayne?"

Book picked up the crate of coin, and Jayne came forward and led them inside.

The warehouse was, pretty much, like every other warehouse in the 'Verse. There's only so much you can do, really, to dress up hundreds of stacks of thousands of cargo crates in an enormous, cavernous room.

"Well, would you look at that," Jayne said. "A warehouse. We don't see these too often."

"I mean, yeah, we go into our share of storehouses, stockpiles, armories...there was that one depository we knocked over that one time...and before I joined you people, there was that distribution center job...but not a lot of warehouses."

"Jayne," Mal said, "are you trying to get on my gorram nerves?"

"Just commentin' on the unique nature of this job, Mal."

"Shut it, Jayne," Zoe said. "Preacher, you got the crate number?"

Mal looked at the manifest markings emblazoned on the side of several nearby crates, and determined which way they needed to go. "This way," he said, and with Jayne in the lead and Zoe in the rear, they made their way down the corridor created by line upon line of stacked crates.

It didn't take long to find it. The crate was pretty large, taller than Mal by about two feet, and about eight feet long and six feet across. Mal shone his flashlight on the crate and read the number. "This is it," he said. "29-94-75. No other markings."

"There wouldn't be," Book said. "The number is all they need."

"Yeah, I know how shipping works," Mal said. "All right, here it is. Now we just gotta get it out of here."

"That crate's a little big for me to haul out on my back," Jayne said. "Of all the gorram--"

Zoe cleared her throat. "I think that's the solution to our problem, Captain," she said. She pointed to an open area about thirty feet away, where two forklifts stood silent.

"There it is, then," Mal said. "Easy. Jayne, you'll drive the lift. We'll get the goods back out to our hauler, get back to the ship, before anyone knows we were here. No problem. See, I told you! Easy job."

At that moment six floodlights turned on, three from each side, all trained on Mal and his crew.

Jayne muttered something in Chinese.

All Mal could do was raise his hands and nod for the others to do the same.

Especially "Hey, can I hear that one about that time you both got your asses kicked by the Alliance? I love that one."

That part made me laugh out loud.