Productivity: I has it!

UPDATE: Oh yeah, I forgot something! Updated at bottom.

It's been a pretty busy weekend at Casa Jaquandor:

:: Making dinner last night. I found a new recipe for Chicago Deep Dish Pizza crust, which I tried out with these results: 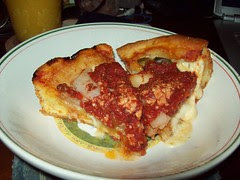 Wonderful! My original Chicago Pizza crust recipe was good, but I always felt like something was missing, because it didn't turn out as flaky or buttery as the crust at Pizzeria Uno. So I found this recipe, which is pretty close to the same except that it adds a secret ingredient.

Yum!!! I love this stuff, even if it does take quite a while to make.

:: The big task, though, was changing The Wife's oil. Well, the oil in her car. I can't very well change her oil, right?

Regular readers will remember the debacle that unfolded last time I tried to do this job. Well, this time I met with success, but not without a few speedbumps along the way. First, the weather refused to cooperate for days; I've been trying to get this job done for a week, and only today did the weather finally start to clear up. Second, The Wife's car is not easy to get jacked up high enough to do an oil change. (Next time I'll be buying those little ramp things.) Third, it turned out that we had bought the wrong filter last time, so I had to go off and get the right one. Ugh! But...finally, the oil is changed. Huzzah!

And now, blessed relief! Time for a beer.

UPDATE: Oh yeah, how could I forget this? I've written in the past about various operational difficulties that have afflicted the Main Computer here at Casa Jaquandor -- the super-loud cooling fan, the CPU cooler that started to fail, the fact that the computer doesn't currently recognize the CD-DVD drive (I need to re-install Windows for this to work again, I think), and so on. Well, something new started happening: the computer would switch into Power-save mode and nothing would bring it back out. So after probing about, I diagnosed this as the video card overheating. Our original video card has a tiny cooling fan of its own, but I discovered that it was no longer spinning at all, so I assumed that was my culprit. I read that you can replace those fans, but I figured that since the computer's nearly four years old anyway, replacing the video card entirely is probably the way to go. I want to get at least one more year out of that machine, anyway. So it was off to Best Buy, where I picked up a new video card for $50. (We don't do hard-core gaming or anything, so those insane cards that cost $170 are not in the running.)

Got home and got the new card physically installed, which was actually quite easy. Hooked everything back up, fired up the computer, and realized a new problem. Everything was working, but the video card needed to have its drivers and such installed via the CD-ROM that it came with.

Which the computer couldn't read because that drive is currently inoperative.

So I put the CD-ROM into my laptop and copied its files to a Flash drive, and then I ran the installation software on the Main Computer using the Flash drive. And now, everything seems to be working. Not only has there been no recurrence of the Power Save thing happening, but the heat sink on the new card must be of higher quality -- that, or the new card just runs cooler -- because the main cooling fan in the computer has been kicking into high gear a lot less frequently. I do still plan to add one more cooling fan to the machine, just to be safe, but so far, so good.

There! I think that's everything.

Oh wait -- I didn't get any writing done at all this weekend. Shit. What a wasted weekend!
scrawled here by Kelly Sedinger at 7:22 PM

Thanks for linking the pizza crust recipe. We made it last night, and it was delicious! Like having my beloved Giordano's, but for about a third of the cost.

Wow! I'm glad to see that recipe get the stamp of approval of an actual Chicagolandian. I thought it turned out really well myself, and I didn't quite execute the recipe correctly. I'm already looking forward to trying again, but not goofing it up.