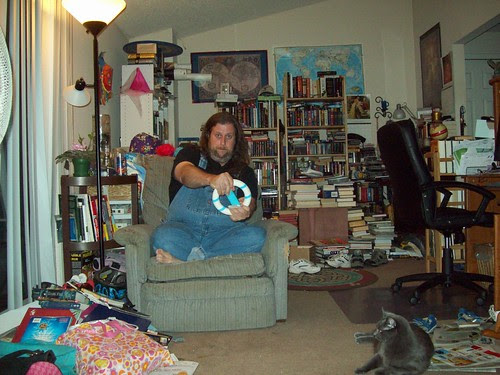 So, we picked up Mario Kart a while back. This is, as the title makes clear, is one of the Mario franchise games. It's a go-kart/race track game, in which you pick your character and your vehicle and navigate at breakneck speeds through various courses that have lots of obstacles.

Of course, this being Mario, you're pitted against all manner of obstructions: walking bombs, yawning precipices over molten lava, enormous caterpillars that wander back and forth across the path you're driving, and so on. Sometimes you're driving on a raceway; other times you're driving on normal roads that are populated by other cars. There are races on ice, and there's a maddening race on a narrow track that orbits the Earth. (Go off the road on that one, and you burn up on re-entry. Wheeeee!!!)

Mario Kart is an occasionally maddening game to play. There are ways to pick up items that help you out throughout the game; some of these give you speed bursts, while others are weapons you deploy to slow down the other drivers. The other drivers, though, get to pick up the same kinds of weapons, and sometimes sheer bad luck can convert a first-place running into limping into the finish in 11th place (out of 12). The most maddening ones are when you're hit with multiple objects, right after the other, so you can't even get yourself started again before you're hit.

But like the other Mario game with which I'm deeply familiar, Super Mario Bros., this one is designed for maximum addictiveness. The races are no more than three or four minutes long, with four races being grouped into a "cup", so there is constant temptation for "just one more race and then I'll go do some writing, really, I totally promise." Especially when certain courses prove to be so difficult that all you want to do is come in first, just once! (I have yet to win Wario's Gold Mine, for example. That one drives me batty.)

The game's visual invention is amazing. Not just the landscapes, but there are humorous touches all over. I especially love all the little cameo appearances by people, creatures, or other items from Super Mario, like the giant cast-iron ball of teeth that barks like a dog, or the ghosts that jeer at you, or Bowser himself. And there are lots of small jokes in the backgrounds, such as in the race through Coconut Mall, where at one point you have to contend with cars being driven by whichever Mii's you have created for your system.

scrawled here by Kelly Sedinger at 10:03 AM

Love it! My favorite game on the Wii. We should play each other sometime!