Then you may take me to the Faire....

Yup, 'twas that time of year again yesterday: our kinda-sorta annual voyage to the Sterling Renaissance Festival. Much fun was had by all, even with a large rainstorm that came through at about 5:00. We ducked into an artisan's shop and perused the wares closely while the storm expended itself, which took about a half hour, but in the fifteen minutes before the storm, there was a mass exodus of less-than-hardy folk for the gates, owing to the thunder. This was nice in that it made the last hour, and our own departure from the Festival, much easier, with smaller crowds to navigate.

I'd say more, but well, just about everything I said two years ago still applies. I am happy to report that an entire day at the Festival transpired without me having to hear a single git quoting Monty Python and the Holy Grail; maybe that was because this weekend was "Pirate Weekend", so walking around going ARRRRR! was the order of the day. But hey, I do like me some pirates. We also watched more of the live entertainment than usual, with a highlight being this guy, whose fire-twirling and juggling act we literally lucked into, having chosen the seats in front of his stage to sit upon while we ate the food we'd just bought, not knowing that a show was minutes away from starting: 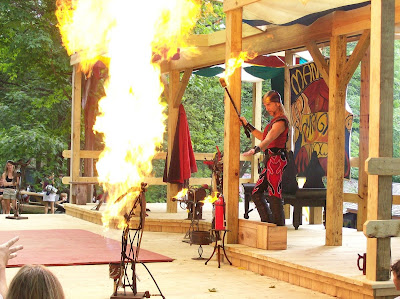 Yeah, always a big fan of fire. If I ever embark on a life of criminal activity, I'll definitely be some kind of pyromaniac. (I probably shouldn't say this kind of thing on the blog...I'll almost certainly be a Person of Interest in something soon.)

Here's the Knight, Sir William Something-or-other, who fought for our honor in the joust. (Our honor and that of everyone else standing on that particular corner of the jousting field.) The choreographed combat was actually enhanced by the downpour an hour earlier, which turned the middle of the combat field into a muddy quagmire. 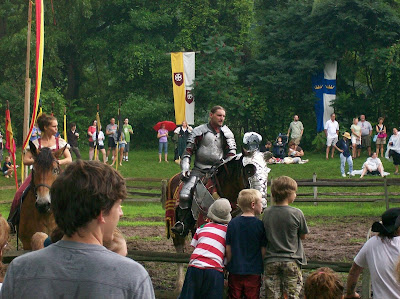 Also, alert readers may recall my 100 Things I Love post from a couple of months ago, on which Number 38 was "Older woman with long hair". Here's a good example thereof: 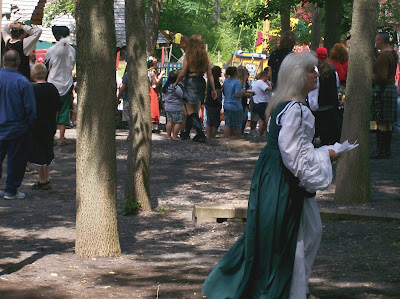 There's just something about an older woman with long hair that always makes me wonder what kind of life she's lived to have opted to keep her hair long, and this woman was very lovely. Her companion was a big guy with long silver hair of his own, and matching thick beard and mustache; he was dressed in very fine period costume as well of black with gold and silver highlighting on the sleeves, massive brown leather boots, and a black leather hat. In truth, he looked the way I plan to look in five or ten years' time. (I didn't get his picture because he was never facing the right way when I came across these two, and frankly, he probably could have kicked my ass if I'd taken his picture when he didn't want it taken.)

But anyway, it was a day of fire-juggling, bawdy jokes, turkey legs, fried dough with maple syrup, rain, jousting, cinnamon almonds and cashews, watching glass-blowing, listening to pipers and drummers, watching people get dunked in the pond, and admiring busty women going to great effort to make themselves look even more busty. Yeah, a good day.

(Oh, for the person who came here an hour or so ago wanting to know if the Festival allows water bottles to be carried in, yes, they do. I carried in an entire cooler bag filled with them, as I've done each time we've gone.)

scrawled here by Kelly Sedinger at 10:25 AM

Sounds like a grand way to pass an afternoon... The Girlfriend and I went to a Faire in Denver a few years ago and really enjoyed ourselves, for pretty much all the reasons you mention here. We've both said it'd be fun to make it an annual thing, but unfortunately Denver isn't the most convenient commute and we don't have a closer one...