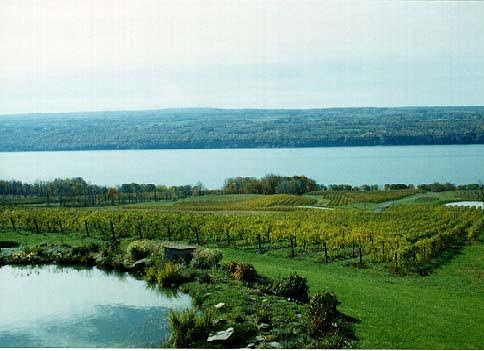 A vineyard on the slopes of one of New York's Finger Lakes.

When the glaciers receded after the last ice age, deep valleys running roughly north-south were cut into the Central New York region, which then filled with water, creating the Finger Lakes. These deep, long and narrow lakes -- reminiscent of the Lochs of Scotland, especially in winter -- provide some of the most wonderful scenery in New York State, as well as a home to the bulk of the state's wine industry. (New York is the second-leading wine producing state in the United States, behind California.) This is because of the steep hillsides along the lakes, where the vineyards reside, and the lakes themselves, which being as deep as they are moderate the climate in their immediate vicinity -- keeping the summers cool enough and the winters mild enough for the grapes to flourish.

And here, as a bonus image, is a fascinating satellite image of the Finger Lakes Region. The large body of water at the photo's top is Lake Ontario; the large lake at the upper right of the photo -- spilling off the edge -- is Oneida Lake, which is about twenty miles away from Syracuse. The city of Syracuse itself lies at the southern end of Onondaga Lake, which too can be seen in this image. It is the small lake, just south and west of Oneida Lake, that runs northwest-to-southeast.