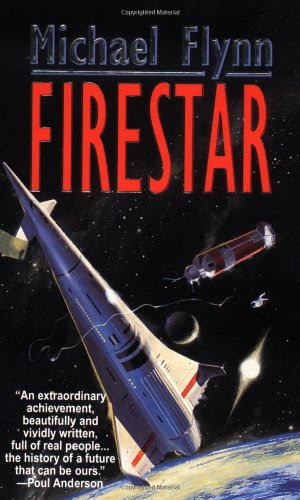 Assuming that we humans are still around five hundred or a thousand years from now, I suspect that this era will be remembered as when we began the process of leaving our planet for other worlds, and for the stars. The exploration and colonization of space has always seemed to me to be absolutely essential, not only to our survival as a species but also as a fulfillment to some part of us, deep deep down, that yearns to wander into the sky. This view of mine, that leaving Earth is our destiny and that we'd best be on with it, is no doubt a large part of why I enjoy what I call "exploratory science fiction" so much. I take this term, which I have just coined this minute, to refer to those SF stories which outline the possible "future histories" of the human race as we begin our journeys to other worlds. Kim Stanley Robinson's magnificent Mars trilogy (along with its companion volume of short fiction, The Martians) is a classic in this SF subgenre. Carl Sagan's novel Contact and the resulting film are also examples. Star Trek can also be seen in this way, at least in some of its stories such as First Contact. And so is the book I have just finished, Michael Flynn's Firestar.

This book deeply thrilled me. It is a very near-future history that centers on a very rich woman, Mariesa van Huyten, who owns a gigantic industrial conglomerate whose resources she employs in creating her very own space program. She is convinced that space is the destiny of humanity, and she is also keenly disappointed in our society's failure to live up to the early promise of its space program, to the point where she condemns the Apollo moonshots as a mistake because we eschewed the establishment of a permanent human presence in space in favor of sensational landings on the Moon which were never repeated. Everything Mariesa does, her entire life, is geared toward her ultimate goal of permanence in space. "Always the Goal", she is constantly saying when it appears that her subordinates are becoming sidetracked. Mariesa van Huyten is a visionary character, whose vision is so grandiose that we are never quite given all the reasons for why she has this particular vision in the first place, although we can make certain guesses (she is inordinately concerned with asteroids, for example). And her vision is so grandiose that the larger portion of it still lies ahead at the novel's conclusion. I assume more will become clear later on; this 850-page novel is only the first in a series of four volumes.

Mariesa's project, in Firestar, centers on the testing and development of reusable Earth-to-low-orbit vehicles which are called "Planks". (I wish Flynn had chosen a more appealing name for the ships, but oh well.) To this end, a good chunk of the novel focuses on the trials and tribulations of the test pilots her organization has recruited. This program, a sort of "Next Generation" of The Right Stuff, could make for a fascinating novel on its own, but Flynn isn't content to stop there. He also delves into the political background of Mariesa van Huyten's project. Flynn is absolutely aware that a private space program would have its detractors, and he shows us plenty of them: the government is against it (Mariesa is encroaching on the government's territory), a prominent environmentalist group is against it (for a number of reasons -- Flynn does a good job at depicting the conflicting motivations at the heart of the environmental movement, even if I am more sympathetic to the environmentalists than Flynn seems to be), and there are also shadowy competitors who are willing to stoop to very low levels to dissuade Mariesa.

But the book's complexity doesn't even stop there, with the test pilots and the political background. Mariesa is also interested in creating the first generation of the true "space age", and to this end one of her subsidiary companies is a school-management company that takes over troubled public schools. In this way Mariesa is able to shepherd future generations to her liking, although we aren't entirely sure why. This seems to be the plotline that will wind its way through Flynn's entire tetralogy.

All this is fascinating enough, but Flynn also knows that there is a dark side to Mariesa van Huyten's visionary status. Her family life is barely more than functional (and sometimes less than that), and she is frequently an unrepentant manipulator of the people around her. Flynn gives us a keen sense of Mariesa's loneliness, but he also shows us that in large part her loneliness is of her own creation, with results that are both expected and unexpected. Flynn knows that it is lonely at the top, and to his credit he depicts it as such. (He also is well aware that loneliness is not exclusive to those at the top, however. In fact, nearly every character in the book is suffering from some kind of loneliness.)

Firestar is not without its flaws. Coincidence plays too large a role, as the lives of a fairly large cast of characters keep intersecting over the ten years that the novel spans. I found Flynn's apparent belief that all we need is a benevolent capitalist to overcome the barriers erected by a sometimes evil but mostly hegemonic government somewhat cloying. The conflicts sometimes come off as forced, as if Flynn needed a conflict at that particular point; one character's deep resentment of Mariesa stems from her overhearing a conversation not meant for her ears, which is something of a soap-opera cliche.

The book also suffers from the same flaw that most near-future stories suffer: once the years of their events come and go, a certain sense of plausibility is lost. Of course, there is nothing that Flynn can do to avoid this; it's simply the way things are in telling future stories. (According to Star Trek, for example, by now we should have launched at least four more Voyager probes and killed a huge portion of the human population in a war over genetic engineering.) The school-privatization movement has lost a bit of the steam that it had when Flynn wrote this book (1996); the Russian space station Mir is used as a setting, years after its destruction; and so forth. I suppose this isn't exactly a flaw; it's just the "nature of the beast". At least Flynn gives us fictional US Presidents, instead of the Robert Zemeckis approach of digitally shoehorning Bill Clinton into the film version of Contact.

At 850 pages, I still found Firestar a very fast read. It's full of thrilling ideas, interesting characters, and a sense that it really could play out this way. Part of why I read science fiction is to assure myself that our destiny as a species really, truly does lie amongst the stars. Firestar appealed to that part of me, and I've already bought Rogue Star, the second book in the series.

scrawled here by Kelly Sedinger at 10:04 AM