This weekend The Wife and I spent a bit of time driving on US 20A, from Orchard Park to Perry Center, where we hung a right for a day trip to Letchworth State Park. After Letchworth we went to Avon, NY where there's a good pizza place we like (they also do gluten-free!), and then we drove home, traveling south from Avon to Geneseo and then back home on 20A again. US 20A is one of my favorite drives for a number of reasons, all of which boil down to that it's just a beautiful road to drive, with its roughly 85 miles going from the flatness of the Buffalo area into the hills of eastern Erie County and then into the more rugged terrain of the western Finger Lakes region.

In addition to US 20A being a beautiful drive (and it's one of many gorgeous drives in autumn), it's also a bit less-traveled than its coast-to-coast parent road, US 20, which runs about twenty miles or so north of 20A (the A is for 'alternate'). Many farms dot its length, so you often have to be on the lookout for a tractor or a combine or hay wagon on its way from one part of one farm to another. US 20A runs east-west, which means lots of railroad crossings, and as you exit East Aurora and start encountering hills, you dip into small towns and up out of them on the other side. (Danger for leadfooted drivers: speed limits go from 55 to 35 immediately at the foot of the hills!)

US 20A is also an old road. It hasn't always been designed as 20A, but its route has existed since before World War II. It goes through old towns and old places. There are many long-closed businesses along its length, including restaurants that I've never known to be open that still carry signage. Restaurants out in the middle of nowhere...but at one point there was enough business for someone to make some money slinging hash or frying steaks. Each little town along the way has its own local hangout, located in very old big houses with fading paint jobs, and woodwork that's long been out of true, but with the current popular brands of beer advertised in neon (or whatever passes for neon these days).

There are two particular spots along US 20A that harken back to the road's, and the region's, younger days. Both are within sight of each other.

US 20A goes through a town called Warsaw, NY, which lies at the bottom of a steep-walled valley. The valley is actually so steep that trucks and other large vehicles (cars with trailers, campers, and buses) aren't even allowed to descend 20A into Warsaw, from either direction. Going either way, before you get to the steep descent into Warsaw, there are big signs and even a turn-off for large vehicles to figure out their alternate routes. Here's the signage at the turnaround west of Warsaw, for eastbound traffic: 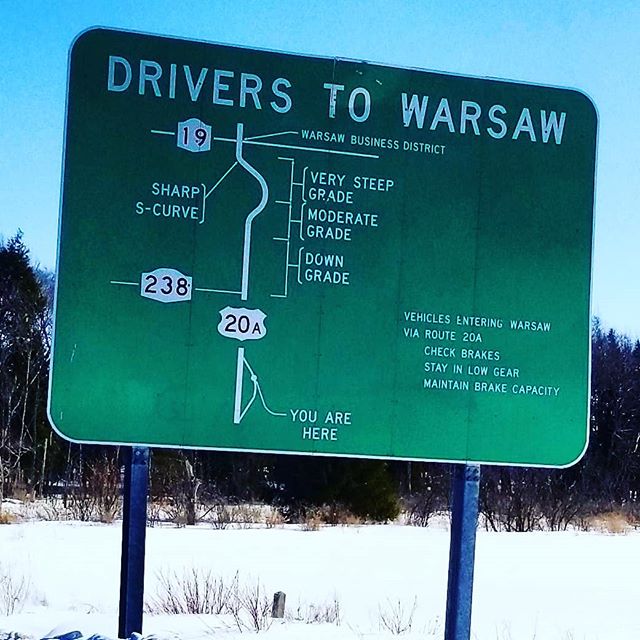 Apparently this was all necessary because of a big fire that happened over fifty years ago:

It's a trucker's worst nightmare -- losing your brakes while traveling down a steep grade.

That's exactly what happened to the driver of a large gasoline tanker on Warsaw's East Hill about 5:55 p.m. on Tuesday, Sept. 2, 1969. The huge tanker careened out of control, smashed through a retaining wall and then crashed into a station wagon, rolling on top of it and bursting into flames.

Mr. and Mrs. Chester Kwiecen of Perry, driving up the hill behind the station wagon, narrowly escaped death by running to safety moments before their vehicle was overtaken by flames.

Much of the East Hill area was transformed into a sea of fire, according to Daily News accounts. The explosion created a river of flames that engulfed four two-story homes within minutes, leaving 17 people homeless. All escaped safely, including an 83-year-old woman who was carried from her home by a neighbor.

Still, the danger was far from over.

Thousands of gallons of gasoline from the destroyed tanker leaked into village sewers, causing numerous explosions that blew manhole covers high into the air and caused a life-threatening situation for hours.

As evening approached, the glow from the massive fire could be seen for miles around the Oatka Valley.

In other areas around the country I've seen runaway truck piles, which are like exit lanes off the thruway except they go into a giant pile of sand, but 20A into Warsaw is too narrow for that sort of thing, so trucks have to just figure out a way around.

The truck entrance to Warsaw isn't the only interesting thing there! Just before that eastbound truck turnaround, on the opposite side of the road maybe a tenth of a mile away, is this building and structure:

As you come around a bend at the top of one of 20A's numerous hills and rises, the trees on the left end and then there's that structure, with the bunker beside it. I remember seeing a lot more of these towers at the tops of hills on our various drives (we road-tripped a lot when I was a kid); I remember one standing atop the big mountain that rises just south of Olean, NY, just before you crossed the line into Pennsylvania. I wouldn't learn for quite a few years just what these towers are, but they were once a crucial part of America's communications infrastructure. They are microwave transmission towers.
The website 99percentinvisible.com (which I just found as I was searching for information on microwave transmitter towers, and which has a book that I just happen to be reading now!) has an interesting and brief page explaining these things:

Between early wired networks and today’s fiber optics sat a system of microwave relay towers transmitting information from coast to coast across the United States. Built in the early 1950s, this line-of-sight network spanned the continent using zig-zag patterns to avoid signal overlap. It conveyed phone conversations and television signals from the era of the Kennedy assassination through the resignation of Nixon.

There's also a map of AT&T's once-extensive nationwide network of these towers, and lo, the Warsaw tower appears to be on it! As I read this map, it seems that the next one in the network is in Springville, NY, a town about 30 miles from Warsaw as the crow flies (or as the microwave beam transmits). These towers have to be placed in line-of-sight from one another, which is how it all works.
On one side of this road, a bit of old communications infrastructure; on the other, a construct built in response to an awful accident in the region's lore.
You can still drive through the old America. You just have to look for it and choose your roads carefully.
scrawled here by Kelly Sedinger at 6:30 AM