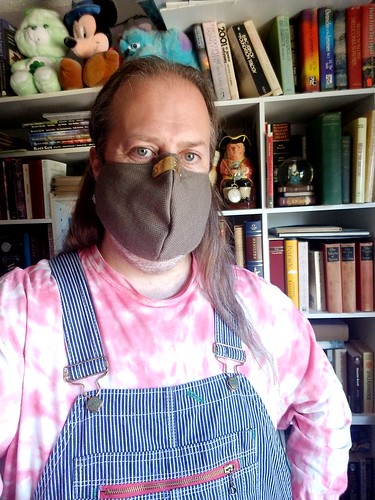 I don't LOVE them, but I wear them. I have had a little prior experience - every time I worked with soil, especially soil from areas grazed decades back (very tiny but real chance of there being anthrax bacilli) and also to avoid allergies from the molds. These were usually N95s, or the home-center version of those. I have a few left hanging around that I might just hang on to for teaching however-many weeks of labs I get to teach this fall before we have to abandon campus. (I presume we will; we are a largely-commuter school with people who work all over the place, and a smaller subset of traditional students who will do the partying and socializing traditional students do).

I have some cloth ones (including some with cute prints) that I can wear in situations where I have a better hope of distancing myself.

I will say one thing about wearing a mask: it keeps me very conscious that there is a pandemic on, and kicks my hypervigilance into high gear, which is probably good for my continued survival, though a trip to the grocery store pretty much wipes me out emotionally for the rest of the day.

I don't love them either. But the greater good and all that.

The real problem is my big head. Some handmade ones that my wife bought at a farmer's market were too small for me. (And were made by SMOKERS, so we had to wash them before wearing them.)

I don't love them either but wear them when inside places that are not my home. If people are wearing them in situations where I wouldn't, (outdoors at the large park or in their cars alone) I don't judge them as I don't know their situations. I have sensory issues so wearing them is difficult for me so I do tend to take them off once I am outside but I don't do it so as to attract attention.

I find it easier to bear wearing them if I run a litany of loving others in the back of my mind while I do it. It is the most public Christian loving act I am doing and thus the bulk of my witness currently.