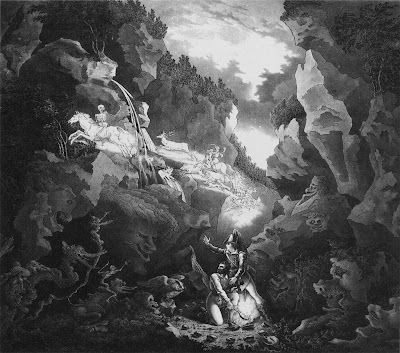 
OK, we're gonna stretch the idea of the tone poem to its breaking point here: it's an entire scene from an opera! Specifically, the wonderful opera Der Freischutz by Carl Maria von Weber. This opera is often cited as the first true opera of the Romantic era, and in its pages one finds (in addition to wonderful music) a lot of ideas about musical storytelling and motif that would later be taken to their logical apotheoses by Richard Wagner. Der Freischutz tells the story of a marksman who, in order to win a shooting contest, enters into a contract with the Devil for seven magic bullets. The first six will kill anything the hunter wishes, never missing their targets; the seventh, however, will be under the control of the Devil himself.

One of this opera's most famous passages is the scene in the second act where our hero, Max, goes to a wooded glen--called the Wolf's Glen--to meet with the Devil and contract for the casting of the magic bullets. This scene is stark and horrific, and Weber's scoring of the scene has been called "the most expressive rendering of the gruesome that is to be found in a musical score". Even now, two hundred years after the opera's composition, the Wolf's Glen scene is unnerving stuff. Here it is, and Happy Halloween!

scrawled here by Kelly Sedinger at 11:40 AM