I need to find more of these, because apparently more exist. If you're not up on your Star Trek: The Next Generation lore, there was a two-part episode where Captain Picard was sent on a special mission and replaced by Captain Jellico (Ronny Cox), who was a very strict, by-the-book kind of captain. Everybody hated him, but by the end he did manage to win over some respect from the crew by the time Picard returned.

But someone has decided to use screenshots from that episode to have Captain Jellico telling bad jokes, like this. I love it! 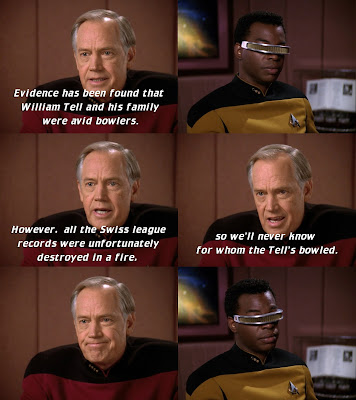