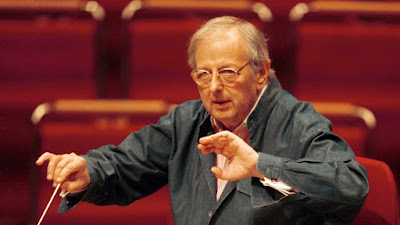 I was all set to move along in the ongoing Song Challenge, but events in the musical world today compel me to push A Song from my Preteen Years to next week.

Andre Previn has died at age 89.

Previn was one of the great musicians of the latter half of the 20th century, accomplished as a conductor and as a pianist and in both classical and in jazz. He did important film work (he conducts the musical arrangements in My Fair Lady, a film of which I'll have much more to say in a forthcoming essay), and he did a lot of important work in the concert hall and on recording. Previn is partly responsible for the re-emergence of the complete score of Rachmaninov's Symphony No. 2, a work which prior to Previn's adopting it in the early 1970s was almost always performed with extensive cuts. (Why, I have never been able to figure out. A complete performance of the work runs no longer than the Berlioz Fantastique or the Mahler 1st or the Beethoven 3rd.) Previn's 1973 recording of that symphony (with the London SO) is the one I heard first, and though Vladimir Ashkenazy's Concertgebouw recording has since overtaken Previn's as my favorite, I almost certainly would not have heard Ashkenazy if not for Previn's wonderful recording.

That's not my selection here, though. Here I'll go with a selection from one of the finest recordings I've ever heard in any genre. This is Previn playing the piano and conducting the Pittsburgh Symphony Orchestra in George Gershwin's Concerto in F. There is so much vitality to this performance, so much verve and excitement, ripe with the energy of pre-WWII American urban society.

Bravo, Maestro Previn! You'll not be forgotten soon, if ever.