So on Christmas Eve we were all gathered in my parents' living room, opening gifts. I went to open one particular box and I heard my sister say to my mother, "Oh look, he's opening it." So I knew that there was something of note therein.

What it was, was a pocket watch. 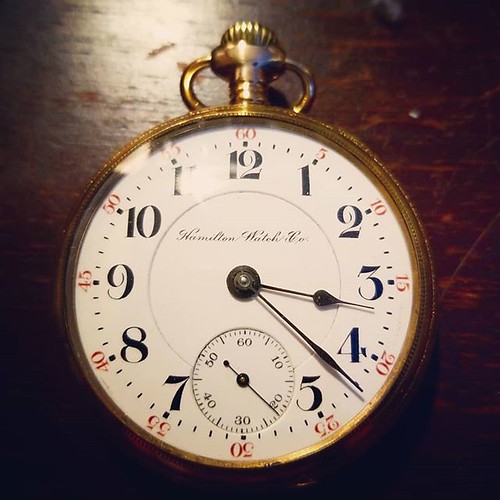 I took it out and admired it. It's clearly an antique, and I was already fascinated by it. I own one other antique pocket watch, and two that aren't antiques that I got from a "steampunk" dealer at a local con. This one is bigger than the antique watch I already own, and it's a hefty one too. I could tell that at some point it was lovingly restored. I figured that my sister, who has an eye for such things and does a lot of antiquing, had spotted it in some emporium or curio shoppe someplace...or that maybe my mother spotted it somewhere.

Little did I know that it belonged to my grandfather.

My father's father was a bricklayer by trade, and he fought in World War I. Apparently he joined the war effort as a way of getting out of his tiny town in the hills of Southwestern Pennsylvania, where his only option for the future would have been to work in the coal mines. I know very little about him save those things, and that he dealt with a broken window in their house by not replacing the window but by building a fireplace. I never knew him. He died in 1949, when my father was only ten, twenty-two years before I was to come along. (I never knew my maternal grandfather, either, and both of my grandmothers died the winter of 1986-87, so I am to this day bewildered by people who live into their adulthood and beyond with multiple grandparents alive.)

I have no idea how Grandpa Sedinger (what would I have called him?) met Grammy (that's what we called my father's mother; my mother's mother was Gramma) or how they courted or when they married. I have no idea how they came to live in a brick house in Pittsburgh, or much of anything else. Nor did I know, until the moment I took it out of the box, that he had owned a pocket watch by the Hamilton Watch Company. But as soon as I learned of the watch's heritage, I couldn't help staring at it just a few moments longer. An old thing, that watch, and it spent however many years in the pocket of a man I never knew but whose influence I must have felt daily.

I don't carry that watch with me--it's too much of a treasure, really. (A bit of an irony, that, given that a common feature of many of the pairs of overalls I own is a pocket just for pocket watches and a slot for the chain and fob.) It hangs on my desk, ticking away the hours, a comforting presence as I write. My mother picked up a neat stand for it on one of her trips to Europe (Florence, Italy, this time), and there it rests. Funny thing, time--a device used to measure it marks it in more ways than just its comforting ticking.

Nice to meet you, Grandpa. 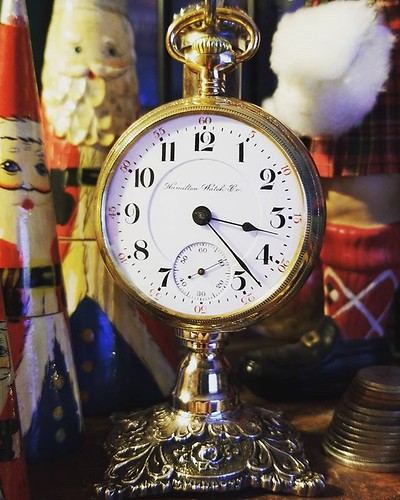 Beautiful post, sir. And that watch stand is too much! As much a treasure as the watch itself...