If Kylo gets together with a bunch of his buddies, is that a Ren-fest? 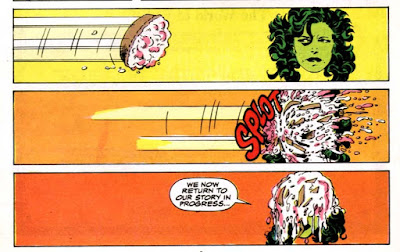 I keep getting this feeling in these two movies that Kylo Ren should be a really interesting character. Adam Driver gives it his all, and he almost single-handedly elevates the character, but the problem with Kylo Ren that TFA had is the same one that TLJ continues. The basics just aren't there, and TLJ doesn't really do much to correct the issue like it did with its heroes. Kylo Ren remains little more than a scenery-chewing villain who wants to be evil for no discernible reason. We still have zero idea of his motivations beyond that he wants to be powerful and kill Jedi and stuff, but we still have no idea why. We have no idea what tempted Ben Solo to the Dark Side. We still have no idea what awful choices he made to get to this point. We still have no idea at all how Snoke got his hooks in him. There are a couple of flashbacks to the final moment of his turning, but they are treated in Rashomon-like fashion, and anyway, the last fall isn't really all that interesting, when you get to it.

Kylo Ren was pretty much always on his way down, and TLJ tells us nothing new about him at all.

In Star Wars, falling to the Dark Side is always presented as about the most tragic thing that can happen to a person. It's a complete abdication of great promise, this decision to use one's innate powers for awful ends. Kylo Ren's story should be doubly so--he is the son of Han Solo and Leia Organa--but again, we learn nothing of it. And again, as with Snoke, it's no good to simply say "Well, we didn't know anything about Darth Vader's fall either," because again, what you can do in the opening chapters of a story isn't the same as what you can do farther on when you know your universe and what can happen within it.

Kylo Ren is deeply angry, but why? He has all this rage for his parents and for Luke, but why? He talks vaguely about needing to destroy the past--"Kill it, if you have to"--but again, why??? What is the point of all this? Is he just tempted by power and nothing else? Maybe he is, but then the films should acknowledge that...and frankly, I don't look to Star Wars for meditations on the banality of evil.

Reasons are completely absent, and so are his desires. Why is he so invested in working with Rey? He's only just met her a few days before. Is it because he senses someone as powerful as he is? Maybe, but maybe not--the film supports either reading. Likewise, until the moment he strikes, there is no indication that he intends to kill Snoke and take over. Is this an idea that has just occurred to him? Who knows? The moment is interesting as a second fratricide, actually. Snoke is the second father-figure that Kylo Ren kills in a matter of a few days. And yes, Snoke is a father-figure. How else to describe the wounded look on Kylo Ren's face after his scolding early in the movie? That's the look of a son who has just been tongue-lashed by the father he has been itching to please.

But again...why has Kylo Ren forsaken his own father for this guy?

I don't ever get the feeling of knowing Kylo Ren. He is pretty much a total mystery. Rey claims to feel "conflict" within him, but there is nothing at all for us to base that on...and she turns out to be completely wrong, anyway. He has killed his real father, he kills his second father, he is prepared to kill his mother. He talks of "killing the past" but he lives with all the various trappings of the Sith and the Empire: he is as big a slave to the past as anyone else.

Next: TLJ and failure. Are we almost done? Maybe! Maybe not! Tune in and find out!