This is an essay that I wrote last year on the occasion of the 40th anniversary of the release of the first, the original, STAR WARS, even before it got retitled "A New Hope." I figured I'd repost this today since I am still working on my increasingly enormous reflection piece on The Last Jedi.

May the Fourth be with you! 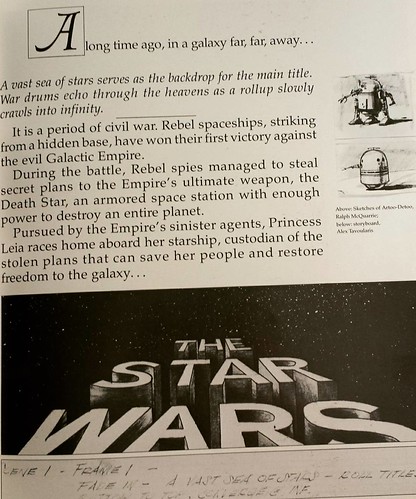 I didn't see Star Wars on opening day. In truth I don't even remember exactly when I saw it, but it was later in the summer of 1977. We had just moved from Wisconsin to Oregon, and in that time I was not even aware of this enormous movie phenomenon whose popularity was sweeping the nation.

I finally saw it, though, with my sister, who is six years older than me.

It was very loud. It opened with big words flying through space and then there was loud spaceships and talking robots (one of whom only talked in beeps and whistles). There was a girl in white and a bad guy in black whose breath sounded weird. There was a desert planet with weird dwarf-creatures and a kid named Luke who lived with his aunt and uncle. (The uncle could be pretty gruff if Luke was goofing off, to which I could relate.) There were more loud spaceships and one really really big spaceship shaped like a giant ball. There was a guy dressed in black and white who helped the farm kid, and this guy had a giant ape-man friend. There were swords made of light and even more spaceships and a big battle in space.

All of that, and I didn't understand a lick of it.

In my defense, I was all of five years old at the time.

Until Star Wars, my movie experience was pretty much limited to stuff like Bugs Bunny Superstar and Disney live-actions like The Shaggy DA (which contained a hoot of a pie fight). Then there was this movie with loud spaceships and robots and a farm kid and a bad guy in black and...well, I had no idea what to make of this movie.

Luckily for me I had my sister, who is six years older than me.

She went all-in for Star Wars. She ate it, drank it, breathed it. She talked about it a lot, and gradually her enthusiasm began to win me over. She explained the story to me because I hadn't understood it all that well, and I decided that I wanted a part of her enthusiasm for my own. So I went with her to see the movie a second time.

I have never ever ever recovered. 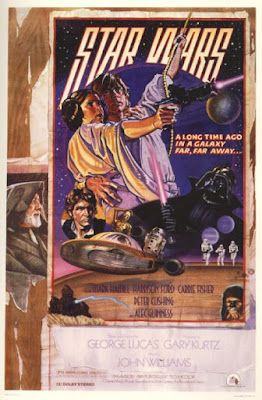 I've been thinking a lot about Star Wars as it nears and achieves 40 years, and I find myself relating to it most as a storyteller myself. As a writer I tend most to look at Star Wars through the prism of story. Many stories have had a deep effect on me, on the stories I want to tell, and the way I go about telling them, but none moreso than Star Wars, even as the Star Wars story itself has changed over the course of its four decades. Most of the core ideas are still there, though, as Star Wars is now no longer in the hands of its creator, George Lucas. Star Wars is still a tale of heroic adventure unfolding in the sky. It is still a tale not just of the wars but more well-focused on the people fighting that war. It is a tale of improbably redeemable villains, of the way our paths mirror those of our parents, and of finding love in the face of desperation. It is a tale of family.

I can't help thinking in most, if not all, of these terms every time I write a story, no matter which genre it's in. Star Wars made me want to be a storyteller (what is playing with action figures, if not storytelling?). It also taught me that stories can focus at times on more mystical matters, and it taught me that story is an excellent way of addressing the challenges people face in their hearts. Most importantly, though, Star Wars taught me about heroes and quests and the wise elders who try to guide the heroes on their way.

Other stories have come since Star Wars arrived, and many have come to places almost as near to my heart. It's not only stories, either; it's all of creative art, really:

Lloyd Alexander's Prydain Chronicles
The Lord of the Rings
Casablanca
On Her Majesty's Secret Service
My Fair Lady
Cosmos
Much Ado About Nothing
The House with a Clock in its Walls
The Lions of Al-Rassan
Mary Stewart's Arthurian trilogy (plus The Wicked Day)
Berlioz's Symphonie fantastique
Rachmaninov's Symphony No. 2 in E minor
Invisible Touch by Genesis
Once and Again
Princess Mononoke

These are all things -- and there are more -- that are at the center of my creative life, but none has ever quite dislodged Star Wars as my Prime Mover. Star Wars is, and continues to be, my Platonic Ideal of what story is.

Even so, I haven't always kept as close an eye on Star Wars as a massive universe as many. I've read only a small handful of all the many novels and comics written over the years, and I haven't played any of the video games. For me, my appreciation focuses pretty exclusively on the movies themselves, and not just the wonderful Original Trilogy but also the admittedly uneven -- but still, in my eyes, uniquely compelling -- Prequel Trilogy and even to a smaller extent the recent "Rebirth" movies, The Force Awakens and Rogue One. Those form the core.

Star Wars is as strong now as it ever was, and it is very likely even stronger. It has more fans than ever, and it is now in the hands of a corporate power whose pockets are deep enough to maintain it at a very high level for decades to come. More fans are created every day, it seems, and yet...I do have to admit to feeling a certain level of possibly grumpy oldsterism. Sure, you kids can love Star Wars and in fact I hope that you will, and that your love for Star Wars will lead you to other things. But I came in on the ground level. My memories may be hazy, but I do remember a time before Star Wars.

I believe that every story one writes -- or rather, every story that I write -- should be, in one way or another, a love letter, either to someone or something. The Song of Forgotten Stars has many influences, but it is ultimately my love letter to Star Wars. If not for Star Wars, there's no way I would be writing this story. It's not just about the internals of Star Wars, though: it's about the way Star Wars impacted me and shaped my life and helped reflected certain relationships in my life. Put it this way: There's a reason why the two main characters in my Forgotten Stars books are two Princesses, one of whom is six years older than the other. It's a dynamic that makes sense to me on a lot of different levels.

I also know, from reading a lot about the making of Star Wars over the years and about the life of George Lucas in particular, that the way by which a creative work comes into existence is often a messy one. Lucas's manner of creation is eerily similar to my own, or maybe vice versa. Lucas is someone who starts out by following ideas in any direction they might go, and only gradually whittles things down and discards this notion or that idea until a streamlined story starts to emerge. I work the same way, at least in part. My rough drafts are often very messy and they always contain entire ideas that I remove entirely, for one reason or another. Lucas has done so much mixing and matching of ideas over the decades (remember that for him, Star Wars is 47 or 48 years old, depending on where he dates The Beginning) that he at times seems to be misremembering his own history. I know how he feels. There are times when an idea seems so organic that it's hard to claim it for my own. Even if it is.

So thank you for forty years, Star Wars! And may the Force be with you, forevermore.