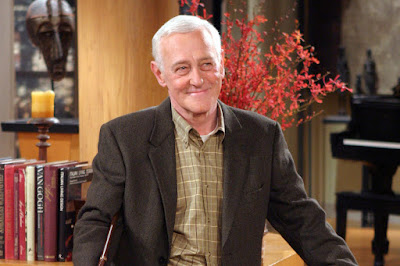 Actor John Mahoney died the other day. His most famous role was probably Martin Crane, father to Frasier and Niles Crane on Frasier, but he did a lot of work over the years, and for me the most memorable thing he did was also the first thing I ever saw him in: the great teen romance film Say Anything, in which he plays Diane Court's father in a complex and moving storyline.

Diane is graduating high school, and she is utterly brilliant, so much so that she has won a fellowship to study and live overseas. However, she meets a fellow senior named Lloyd Dobler, who is massively in love with her and who manages to get her to agree to a date. So begins a whirlwind romance that unfolds over the weeks after graduation, which is for many young people a time of great uncertainty if not outright fear.

Mr. Court, obviously, dislikes Lloyd, who has no real plan for his own future other than to date Diane as much as possible and maybe pursue kickboxing, which he indicates is "the sport of the future". (This was 1989, mind you.) This is the standard old trope, isn't it? The doting father of the highly-achieving girl detesting the "bad boy" that she is dating.

But the film subverts the trope. Lloyd isn't a "bad boy" at all; in fact, everyone who knows him loves him, from one end of the school's social ladder to the other. He is talented and smart in his own ways, even if he doesn't immediately scream out "future success story". Also, Diane's relationship with Mr. Court isn't typical for films like this. Many times the doting father is a stern figure who seems cold and distant, intent only on preserving the family's status or some such thing. Mr. Court, though, is warm and encouraging with Diane, clearly loving her deeply and wanting her to succeed. He doesn't seem terribly invested in his own life, and in actuality, the Courts' home life is presented as mainly comfortable, and not wealthy. Nice, but not too nice.

And that's the problem.

Rather than keep Mr. Court as just some obstacle for Diane and Lloyd, the film gives him his own motivations. It turns out that he has been embezzling from his own business for years, and that the IRS is closing in on him. His whole house of cards is about to collapse and he knows it. That is why he is so invested in getting Diane into that fellowship: it will get her free, it will keep her safe when his own actions come back to haunt him. Lloyd, though, represents a threat to that. If Diane stays in Seattle for Lloyd...if she foregoes this opportunity...Mr. Court sees those possibilities as sheer disaster.

Through all this John Mahoney plays Mr. Court brilliantly. He clearly loves his daughter very deeply, even as we learn that he has been lying to her for years. His distaste for Lloyd doesn't become personal until the very end, when he realizes that Diane is going to have both the schooling abroad and a life (for now) with this directionless, almost Zen-like boy. Mahoney shows Mr. Court's conflicting emotions and growing tension throughout, in scenes like one where he huddles in the bathtub in a moment of encroaching terror and another when he is buying luggage for Diane and starts to flirt a little--just a little--with the salesperson, but then has to stop when he credit card is denied. When Diane confronts him, giving him an opportunity to confess and he doesn't (after an IRS agent has asked her if her home is "nice...but not too nice"), he tries resisting at first, but then the shame is written clear on his face when Diane has to tell him that she found his stash of money.

I have always felt that Say Anything is one of the greatest teen romances ever filmed, if not the greatest, and I've never wavered from that opinion. John Mahoney's performance is a big part of that. The film has an open ending, leaving it up to us to decide what the future holds for Diane and for Lloyd and for Mr. Court, and if their relationships will ever heal. If not for the very human portrayal of Mr. Court, this wouldn't really work.

Mahoney was in a lot of stuff, obviously, and I was a big fan of Frasier through its run. Mahoney's Martin Crane was a blue collar man who didn't have very many ways to relate to his two academic sons, but he always found a way, such as in this wonderful scene where he comes up with a very distinctive way of cheering Frasier and Niles up.


There's another scene, in another episode, when Niles has a little too much to drink and indicates his belief that he and Frasier are both massive disappointments to their father, a supposition that sends Martin to very quick anger. Mahoney nails the emotion in that scene as he snarls, "You will not put these words in my mouth. I was always proud of you boys."

John Mahoney was a terrific actor, and I already miss him, even though I realize that I haven't seen him in anything new in some time. He did a number of memorable voice roles for animated films like Atlantis and The Iron Giant, and he was quite active on the stage as well. Thanks for the memories, John Mahoney. You were a great one.
scrawled here by Kelly Sedinger at 8:22 PM