Something for Thursday (Twenty Years of HARRY POTTER edition) 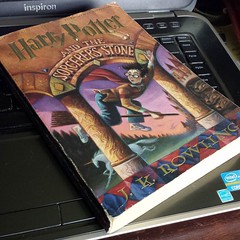 The other day marked the twentieth anniversary of the initial publication of Harry Potter and the Sorcerer's Stone (or Philosopher's Stone, if you live in Britain--and I guess I should link that first since that's where the book came first). I could wax poetic for quite a long post about Harry Potter and the enormous effects on culture those books had, but others have weighed in more intelligently than I could on those points. I, like many others, have had my own "personal journey" with Harry Potter, starting with sometime in what must have been 1999 when I started noticing these books with the unusual cover art and title font on the front displays at Borders, and very prominently placed in the childrens' section. By the time I was aware of the growing Harry Potter phenomenon, there were already three books out, and I bought the first one out of curiosity.

One more home decor project DONE. I hand painted the first page of Harry Potter on a wall in my office for inspiration. Can we all take a second to laugh at the fact I legit thought this would be a fun weekend project I could bang out in about 4 hours? In reality, it took 60 hours over the course of 3 weeks, thus proving once again I am absolute crap at time estimation. But whatever. WORTH IT. #harrypotter #harrypotterforever #hpfandom #harrypotternerd #homedecor #art

I never looked back, eagerly snatching up each book as it came out and squeezing it into my reading time. By the release of Deathly Hallows, the last book, I was in as much a fever-pitch as anyone, and I remember a kind of Devil's bargain I made with The Daughter at the time, who was about eight years old: on a Sunday afternoon I told her that she could play videogames for as long as she wanted. Then I went out on the balcony of our apartment and plowed through the last four hundred or so pages of that book.

I've been meaning to reread the Potter books for some time now, and perhaps this winter it will finally be time to do so. (In honesty, I associate the books--as I do most fantasy--with the cooler months. I've never been sure why that is, because fantasy is not an inherently autumnal genre.) I also need to rewatch the movies, which are, for the most part, excellent adaptations and retellings of the story.

One final note: I included a call-back to Harry in Stardancer. How could I not? While the situation involving Lt. Rasharri's revelation to Tariana Osono of her powers isn't so confrontational as when Hagrid tells Harry that he's a wizard, it was hard not to see this moment in my story as a reflection of the earlier one. 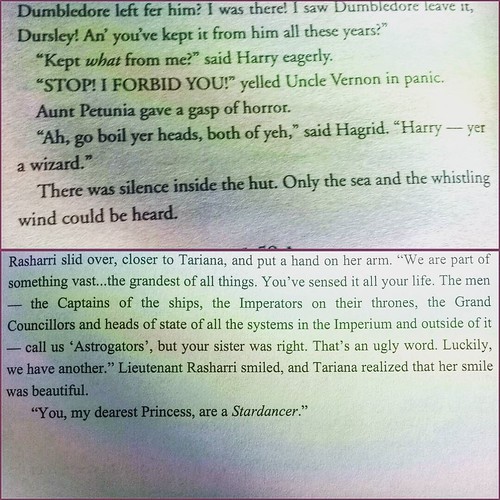 And now, since this is Something for Thursday and all, some music!


scrawled here by Kelly Sedinger at 6:30 AM

Email ThisBlogThis!Share to TwitterShare to FacebookShare to Pinterest
Labels: Books, Fantasy, Movies, Something For Thursday