Fourteen years ago I wrote the following on Memorial Day, and I wanted to revisit it. It's about the Vietnam Veteran whose name I remember, despite the fact that I had no relation to him and clearly never knew him, because he was killed four years before I was born.

Memorial Day, for all its solemnity, has for me always been something of a distant holiday, because no one close to me has ever fallen in war, and in fact I have to look pretty far for relatives who have even served in wartime. Both of my grandfathers fought in World War I, but both had been dead for years when I was born. I know that an uncle of mine served during World War II, but I also know that he saw no action (not to belittle his service, but Memorial Day is generally set aside to remember those who paid the "last full price of devotion"). My father-in-law served in Viet Nam, but my own father did not (he had college deferments for the first half of the war, and was above draft age during the second). So there is little in my family history to personalize Memorial Day; for me, it really is a day to remember "all the men and women who have died in service to the United States".

One personal remembrance, though, does creep up for me each Memorial Day. It has nothing at all to do with my family; in fact, I have no connection with the young man in question.

When I was in grade school, during the fall and spring, when the weather was nice, we would have gym class outdoors, at the athletic field. On good days we'd play softball or flag football or soccer; on not-so-good days we'd run around the quarter-mile track. But the walk to the athletic field involved crossing the street in front of the school and walking a tenth of a mile or so down the street, past the town cemetery. I remember that at the corner of the cemetery we passed, behind the wrought-iron fence, the grave of a man named Larry Havers was visible. His stone was decorated with a photograph of him, in military uniform. I don't recall what branch in which he served, nor do I recall his date-of-birth as given on the stone, but I do recall the year of his death: 1967. I even think the stone specified the specific battle in which he was killed in action, but I'm not sure about that, either.

That's what I remember each Memorial Day: the grave of a man I never knew, who died four years before I was born in a place across the world to which I doubt I'll ever go. And in the absence of anyone from my own family, Mr. Havers's name will probably be the one I look for if I ever visit that memorial in Washington. I hope his family wouldn't mind.


I looked online and found these images, first of Mr. Havers's obituary and then of Mr. Havers himself. The things you remember. I wonder what kind of man he was. This year he has been gone for half a century. His name is not forgotten. 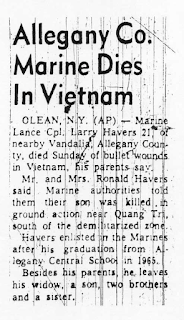 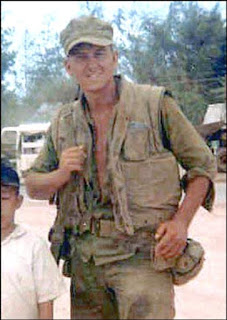 Mr. Havers's service information can be found on the Virtual Vietnam Wall here. He was born 14 October 1946 and died 29 October 1967, in Thua Thien.