The Host who can Boast the Most Roast

So I saw an article last week someplace, maybe Facebook, about a recipe that had somehow gone viral: "Mississippi Roast". The recipe is insanely simple:

1. Spray your crockpot with cooking spray.
2. Throw in a chuck roast, around 3 to 4 lbs.
3. Sprinkle directly onto the meat 1 packet of gravy or au jus mix, and 1 packet of Ranch dressing mix.
4. Put a stick of butter on top of this.
5. Scatter 8-10 pepperoncini (banana peppers, pickled in a jar) around the top of the meat.
6. Cook on LOW for eight hours.

I read the article with fascination, and then I asked people on Facebook and elsewhere if they'd ever heard of such a thing (they had), and I Googled it to see if this was real (it is). I have to admit that I was skeptical. I'm a sucker for recipes of the "Throw a small number of ingredients in the crockpot, wait six to eight hours, and eat the resulting deliciousness," but this was pushing me a little far.

But not far enough to try it.

Here's what it looked like before I put the lid on and turned on the crockpot: 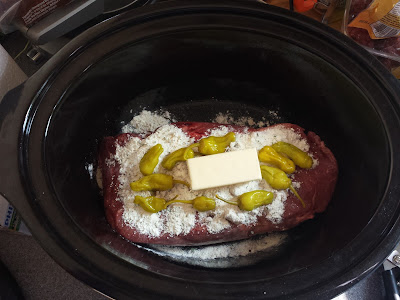 And here's the result, served alongside some roasted potato wedges: 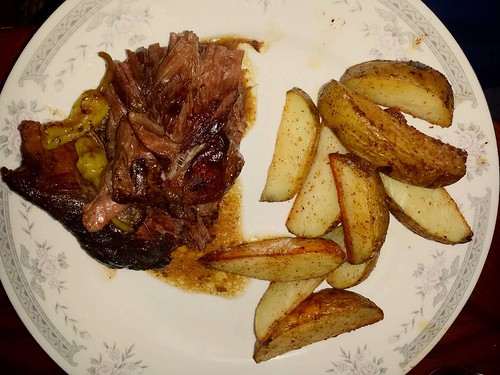 It was amazing. I always find that pot roast needs some help in the seasoning department, but somehow this seasoning turned out perfect. The only downside? After we each had two servings of the meat, there weren't many leftovers left, and you want leftovers when the meat turns out that good. You know, sandwiches and stuff.

Next time, I'm doing two roasts.
scrawled here by Kelly Sedinger at 6:30 AM

I am SO going to try this!