Stuff for a Sunday!

Some links before we head out to brunch in Manhattan, as people do! (I am so going to miss this city...but more on that another time!)

:: A couple of Star Wars links first. Here's an interesting interview with Lawrence Kasdan, who wrote The Empire Strikes Back and co-wrote Return of the Jedi, and has now returned to Star Wars to write episodes VII, VIII, and IX. Kasdan also wrote Raiders of the Lost Ark and Silverado, two other faves of mine.

:: Here's an interesting history of Marvel Comics's first foray into Star Wars comics, back before the Expanded Universe or the Prequels or just about anything else. There were some really fun stories in those Marvel comics, and I especially liked the creative team that was in charge at the end of the series's run; I wish they'd have had more time to flesh out the story they were working on before the series's abrupt cancellation.

:: Exploring an active volcano via kayak. Don't try this at home, kids!

:: Many years ago -- in 1980 or so -- my mother took me to see the Ice Capades when we were living in Portland, OR. The chief attraction was Dorothy Hamill, of course, but to our dismay, Ms. Hamill did not perform when we went, because she was sick or something. But still, I got to see the Ice Capades! I'd pretty much forgotten all about it until a random check of the RetroSpace Flickr stream, whereupon I found that they posted captures of some of the pages from that Ice Capades program. I had this program book, and wow, does this take me back to when I was no more than nine years old! 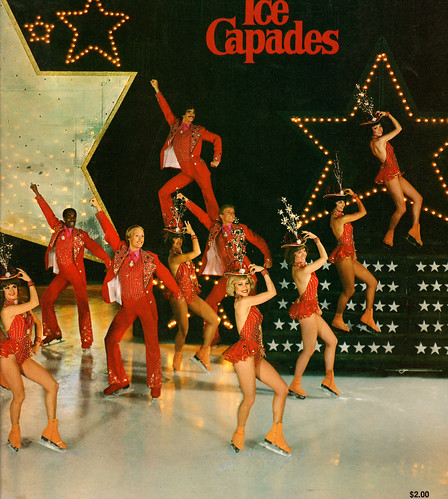 And yes, the Ice Capades really were that cheesy, which is why it was awesome!

That's about all...behave, folks, and regular stuff should resume mid-week! (Today's our last full day in NYC and then tomorrow we're on the Amtrak all day.)

scrawled here by Kelly Sedinger at 9:35 AM

The Cosmopolitan in Overalls, that should be the title of your NYC memoir