OK, folks, obviously I'm not sure I'll be able to get these posts done on the weekly schedule I'd hoped for at the outset (whilst moving is in progress -- by the second week of May, the dust should be in the "settling" stage), but you never know. That's my way of saying, at the same time, "Sorry for last week" and "I may well miss next week". But for right now -- Robert Schumann is in the offing.

Schumann was one of the archetypal Romantics in not just the history of music, but the history of art. If you went to make a fictional biography of a full-blown Romantic figure in all his glory, the resulting life might well look like Robert Schumann's. He was enormously gifted, but suffered from mental illness, which led him to spending the rest of his shortened years in a sanitarium after he tried to kill himself by flinging himself from a bridge into a likely filthy river. He had one of music history's great love affairs in his marriage to Clara Wieck, who was under the legal age when he met her and their affair began. Schumann was a brilliant and fiery soul who burned himself out quickly. One of the oddest stories about Schumann is that he might have become one of history's greatest pianists, had he not injured one of his hands permanently in the course of trying to strengthen his ring finger by rigging up some kind of contraption to restrict its motion while playing.

Schumann wrote pretty much everything, although I suspect nowadays it's his piano music that is best known -- the great Vladimir Horowitz, for example, nearly always used Schumann's delicate and gorgeous "Traumerei" as an encore -- but his orchestral music is quite good. It takes a pretty good conductor to expose Schumann's orchestral textures, which can be on the "dense" side. In this performance, conductor Daniel Harding (whose work I am hearing for the first time) does an excellent job of making the various textures shine through in the orchestra (in this case the Mahler Chamber Orchestra). There are places in this performance where the strings become almost ethereal, particularly in the third movement. This symphony is one of Schumann's "sunnier" works, but it still has moments when it broods. The opening passages here are of particular interest, with a brass chorale over gentle churning in the lower strings. That brass chorale comes and goes throughout the work.

And speaking of brass chorale, get a load of these trumpets! 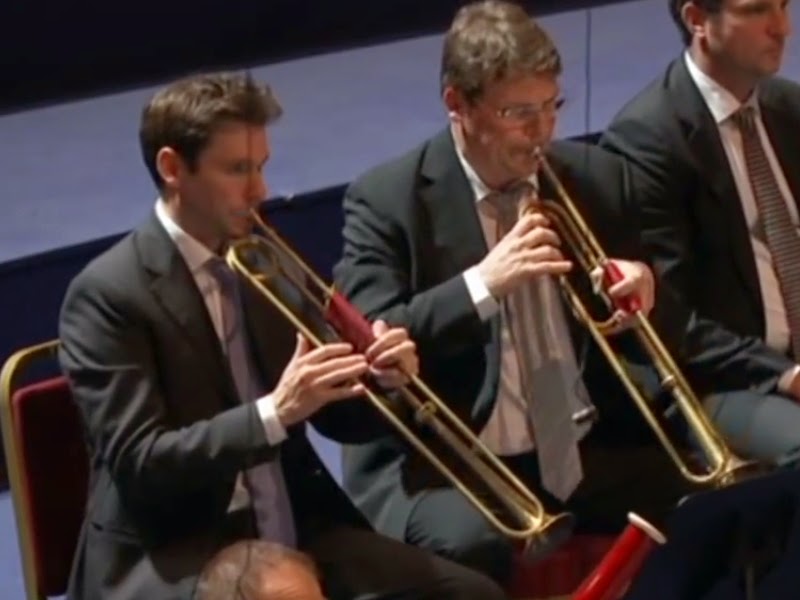 Those are what you call natural trumpets. Note the lack of any valving or extra tubing. On natural trumpets, the player changes notes by shifting the lip muscles in certain ways (it's hard to explain in technical terms, but it's not unlike how one changes notes when whistling). These may be a more modern type of natural trumpet called a "baroque trumpet", which is a modern variation on the natural trumpet that includes finger holes to allow for better intonation. It's just always cool to see these types of instruments in action, as the valve trumpets weren't invented until the early 1800s and didn't become really the standard until the latter half of the 19th century. Once a trumpet geek, always a trumpet geek!

Here is Robert Schumann's Symphony No. 2 in C major.


Next week: I'm actually not sure yet. Maybe more Schumann; he did write four symphonies, after all. Or maybe not. You never know!

scrawled here by Kelly Sedinger at 9:07 AM

I liked the conductor's enthusiasm before the performance, possibly more than the piece. but listening to unfamiliar music at work is dodgy, so I should give it another go.

BTW, you are absolutely right about multiple versions of music. You wouldn't say Gladys Knight and the Pips had a hit with I Heard It Through the grapevine, so I need no other version.