At the end of last year, all the big hardware stores started displaying what I came to call "dog bone wrenches", because they look like dog bones. On each end was not one single head to fit a single size of fastener, but a swiveling doohickey with four different heads on it to accomodate multiple fasteners. Here's a representative example. None of the reviews I read of such tools were particularly enthusiastic, and the things just look gangly and unwieldy, so I never even considered buying one.

But I was in AutoZone a month or so ago, and I saw these: 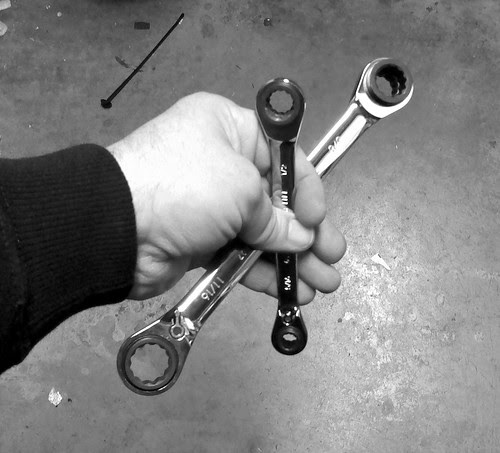 I was sufficiently intrigued that I bought them. They're not terribly expensive, as ratcheting wrenches go, and each one has four sizes on it, for a total of...let's see, carry the two...eight common SAE hex bolt sizes. You can kind of see how they get different sizes by looking at the upper end of the larger wrench in the picture there -- the ratcheting insert actually divides into two different sizes, depending on which side of the wrench is down and which is facing up. In practice, this does make operation a little tricky once in a while as a bolt head can slip all the way through, but I like having an option now for when my socket set isn't the weapon of choice (when the opening I have to work in is shallowed than the depth of my ratchet, for one).

These aren't awesome tools, by any chance, and I'd love to own a fuller set of ratcheting wrenches sometime in the future. But as ratcheting wrenches are pretty expensive, these two combo-wrenches make a pretty good compromise for now.
scrawled here by Kelly Sedinger at 11:06 PM

oh, I thought you meant wenching, which I thought was out of character for you, but...

I picked up a set of similar ratcheting wrenches from Columbia Tools (they do traveling sale setups at local firehalls and fair grounds around where I live) a couple years ago, I like them, but they seem to be missing some sizes that I typically need, which makes me mad, then I need to go to the traditional closed end wrenches.

Come to think of it, I haven't seen any flyers from them last year. I'll have to see if they are coming back this year.