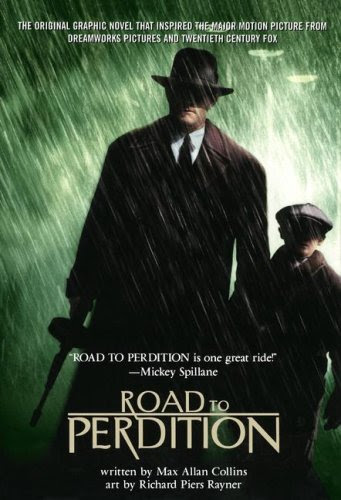 Earlier this week I saw the film Road To Perdition, and the next day I read the graphic novel on which the film is based. SPOILERS follow.

The film and the graphic novel are both fascinating works of gangland fiction, and they are actually much more different than one might expect. In fact, the storylines of each are only roughly similar -- sharing a few scenes, but in general diverging greatly -- and the themes of each are very different. Anyone coming to either the film or the book with expectations based on the other will be quite surprised. Pleasantly so, I think.

The film, as Roger Ebert notes in his review, is steeped in the feel of Greek tragedy. The subtext of the film is centered wholly on the dynamic between fathers and sons, with Paul Newman as the patriarch of the crime family and Tom Hanks as his most trusted enforcer, whom he loves as a son. The problems arise from Newman's actual son, a weaselly and cowardly man who manipulates events to come out in his favor, setting the Hanks character -- Michael Sullivan -- up to be murdered. The plot fails, but Mr. Rooney (Paul Newman) has no choice but to stand by his real son and foresake the adoptive one, even though emotionally the adoptive one is a far truer son than the real one. Watching the film, I was reminded somewhat incongruously of the part of the Arthurian legend when King Arthur's illegitimate son, Mordred, comes along and sets in motion the collapse of Camelot.

The dynamic between the father figure of Paul Newman and his two sons is likewise reflected in Tom Hanks and his two sons, one of whom he seems to love more than the other -- until the one he seems to love more is murdered. There are scenes in the film that show Sullivan (Hanks) and his surviving son, Michael Jr., trying to connect with one another, including one particularly moving scene where the child actually asks if his father loved the brother more. Sullivan denies it, but he is forced to make an admission about his surviving son and his hopes for his future that is heartbreaking in its simplicity and seeming impossibility. He does not want Michael to grow up to be like him, but we get the feeling that it is already coming to pass. As Ebert notes, this sense of fate being played out is palpable throughout the film, whose theme seems to be that cycles exist in families that are immutable, unbreakable. As we watch the film's events transpire, we hope that Michael Jr. will not be forced to become like Michael Sr. -- that he will not have to kill -- but we almost know that he will, and we wait for it to happen. Thus, it feels almost like divine intervention when, in the end, he does not. The film ends on an unexpectedly hopeful note, because the cycle has been broken and now Michael Jr. may grow up along a different path.

Much of this father-son subtext is absent in the graphic novel, however; the theme of the novel seems to be atonement. There is a great deal more religious imagery in the novel, with Michael Sr. finding a Catholic church and confessing his sins after each time that he kills. "God made Irishmen pale," Michael Jr. says, narrating his tale, "but not as pale as those priests who came out after Papa had unburdened his soul to them." The book is much more concerned with the possibility of men like Michael Sr., even while wreaking such terrible violence, still being absolved of their sins and going to Heaven than is the film, in which everyone seems totally accepting of the inevitability of Hell. Likewise, the concern of Michael Sr. that his son never have to kill is not much present in the novel, because about halfway through the novel Michael Jr. does kill. So the focus becomes not on breaking the familial cycle of fate, but on gaining atonement and absolution. The novel's final denouement reveals Michael Jr.'s fate as an adult, whereas the film ends with Michael Jr. still as a child facing an uncertain future.

There are other, more mechanical differences between the film and the novel. The novel's story is more of a historical, "true crime" type of story, drawn from actual events; thus the "Rooney" crime family from an un-named city in the film is actually based on the novel's historically accurate Looney Gang, from the Tri-Cities (the Quad Cities, before Bettendorf was added). The action in the film is much more centralized on the enmity between Sullivan and Connor Rooney, whereas in the novel Sullivan is going after the entire Looney clan -- including the father, who was actually the one who betrayed him. More historical events are used in the book, including Eliot Ness's raid on a New Mexico hideout of Al Capone's, and the burning of an illegal riverboat casino. And the biggest difference between the book and the graphic novel is that the film's photographer hitman, played by Jude Law, does not exist in the book. Thus the book avoids what I found to be the film's biggest flaw: the fact that, when everything else has been resolved, the film's last fifteen minutes or so boil down to waiting for Jude Law to reappear. The book does not totally avoid the deus ex machina, but it doesn't crank as noticeably as in the film.

Both the film and the graphic novel are impressive visually; the film's atmosphere of cold dampness was so pervasive that I don't recall ever being quite so glad to exit a theater into sunshine, and the novel's illustrations -- by Richard Piers Rayner -- are superb black-and-white images that look like woodcuts, and have a not-insignificant similarity to the style of illustration used by Goseki Kojima in the brilliant Lone Wolf and Cub manga on which the entire story was partly based in the first place. (The novel's epigram is a quote by Kazuo Koike, the writer of Lone Wolf and Cub.)

"The book is better than the movie" is often proferred as an immutable truth, but it's not always so. In the case of Road To Perdition, both are interesting and complementary of each other.