Hey folks! Yup, another blogging slow-down. Work at The Store is calming back down a bit, so that's good, but what isn't calming down is Princesses III, which is now starting to really get into the meat of the climactic bits. And that's great! But most of my writing fire is going there right now, and rightly so. Bear with me!

(In a procedural note, I'm thrilled to see that this third book is markedly different in tone and style and content from the second, which was likewise different from the first. I seem to be avoiding the trap of basically telling the same story three different times, and I'm deepening the mysteries and broadening the canvas each time out. Structurally, I'm hoping for each book to tell a slightly bigger story than the previous one, until by the end of the series, I've got a Galactic Epic going. We'll see how that goes, but that's the foundational idea, at least.)

Anyway, here's a picture. This is a large-ish (about a foot tall) action figure of Han Solo that we're selling at The Store. It looks, as I think you'll agree, almost nothing like Harrison Ford. Problem is, it does look like somebody. 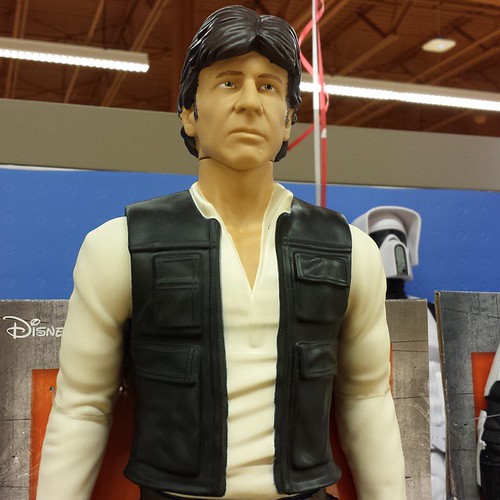 (And note the Disney branding....)

I don't know. But he IS crosseyed, so maybe Andy Cohen or Taylor Lautner?

I was gonna say vaguely Pacino-esque, but I think Ray Romano fits better.