So, how are things going? Well, when I'm actively producing a first draft, I track my daily output in a spreadsheet. Here's a photo of that spreadsheet, from the beginning of March: 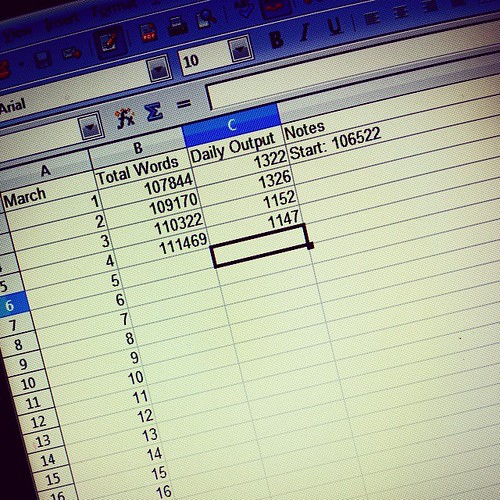 As of tonight, here's where we stand: 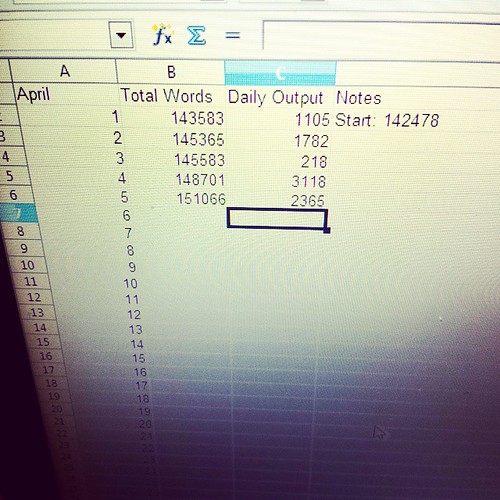 What does that mean, though , in terms of the book itself? Well, my goal on the first two books in The Song of Forgotten Stars was a first draft of 180K words. Stardancer came in a little under that (but not much), and Princesses II: Electric Boogaloo (not the actual title) came in a little over it (but not much). I am currently expecting Princesses III: Flight of the Bumblebee (not the actual title) to come in over the 180K target by more than Princesses II, but still not by a huge amount. Maybe around 190K. There's a lot that happens in the final act, and in general, this book is turning out to be the most structurally complex of the series thus far.

Obviously I don't want to say too much, but seeing the evolution of this book as it's crystallized in my mind has been really interesting. I'm doing some things differently this time, in terms of narrative structure, that I didn't do in the first two, and this one has a totally different flavor, as well. I like that each of these books goes to different places, does different things, and focuses on other characters and relationships. I wish I could say more, but you'll all see what I'm talking about, in November 2016 when Book III comes out!

(But this is funny: when I started the book, I actually knew what the last scene was. Each one of these books ends with something like a Marvel superhero movie post-credits thing that sets up something in the next book, and I knew what this book's ending cliffhanger was going to be, so I wrote it first, before even starting with Chapter One.

And now, things that have come to me since I started Chapter One have made it necessary for me to rewrite that cliffhanger scene! I love when my own writing surprises me.)

More updates to come! I'll certainly announce when I'm done with this draft, because when I am, it's time to start getting Princesses II ready for its November 2015 debut.