OK, this is all over the place, but I'm probably not a geek in good standing if I don't post it too, so: Indy's back. 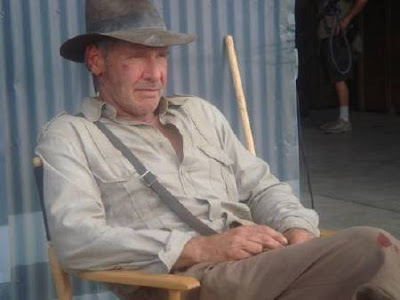 I've generally been ambivalent about a fourth Indiana Jones movie, but if they can make another good one, then I'm fine with it. I loved all three of the originals, although I don't like Last Crusade as much as I did initially and I've found that Temple of Doom is actually better than I thought it was when it first came out. Raiders is, of course, a classic -- and by pure chance, I listened to its score last week and was struck anew by how good John Williams was between 1975 (Jaws) and 1985, when he was just cranking out one amazing score after another with almost no let-downs.

I'm also kind of curious to see what happens when Indy IV comes out. If it's good, we'll hear about how Spielberg and Harrison Ford still got it, but if it's a clunker, I'd bet real money that the villain is somehow George Lucas.
scrawled here by Kelly Sedinger at 8:40 AM

The entire original score is worth seeking out, although it's out of print now. I think the label was Digital Compact Classics, or something like that.

Another Indiana Jones movie... I don't know how I feel about that. I wasn't all that wild about the The Last Crusade. I'm sort of prepared to be disappointed but I hope I will be pleasantly surprised.

Actually, for my money Spielberg has misfired very, very badly on his last several films. So much so that I'm at the point where I can't trust him anymore, whereas Lucas' missteps, while utterly wrongheaded, are at least come by honestly.